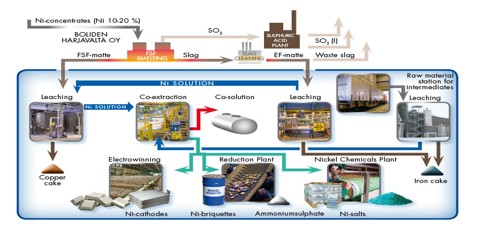 Main ore is Pentlandite; Nickel is extracted from ores through the Mond procedure, in which nickel oxides are purified throughout several steps into pure nickel metal. It is placed with hydrogen and carbon monoxide gases at 122 degrees Fahrenheit, which converts it to impure nickel. Nickel is also a magnetic metal below 653 degrees Fahrenheit. It is somewhat reactive with dilute nitric, hydrochloric and sulfuric acids. Ni is extracted from it by four processes-

(i) Condensation: by oil-froth floatation process.

(iii) Smelting & Bessemarization: A mixture of NiS, CoS & CuS is obtained, which is called “Nickel Matt” that contains- 55% Ni. From Nickel Matt. Ni is collected by Mond or Orford’s process. It includes the following steps:

Three types of containers are used in this process:

(iv) Electrolytic purification: NiSO4 is used as the electrolyte solution.

(i) In a finely divided form (known as raney nickel), it is used as a catalyst in the hydrogenation of oils and fats

(ii) It is used for making crucibles & laboratory apparatus

Why the temperature 121°C is needed for retorting the non-acidic food?