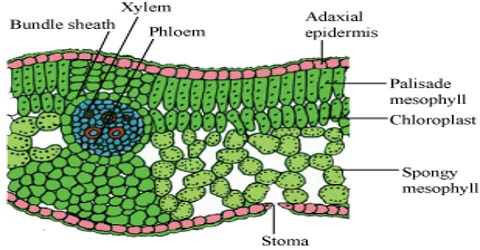 All the tissues in between upper and lower epidermis except veins and the branches of veins are called mesophyll tissue. The tissues of a leaf those are located in between the layers of the epidermis and carry on photosynthesis, consisting of the palisade layer and the spongy parenchyma. Most mesophyll cells include chloroplasts. 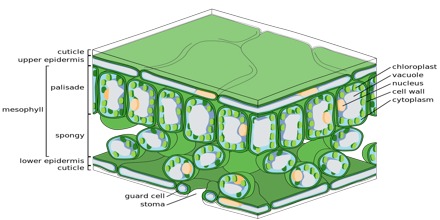 The mesophyll cells make up what is known as a plant’s absorption tissue, which refers to the principal location of photosynthetic reactions. In the majority of flowering plants and in ferns, the mesophyll tissue is comprised of two layers: the palisade layer and the spongy layer.

It has two types of tissue;

Palisade parenchyma is the upper layer of ground tissue in a leaf, consisting of elongated cells beneath and perpendicular to the upper epidermis and constituting the main area of photosynthesis.