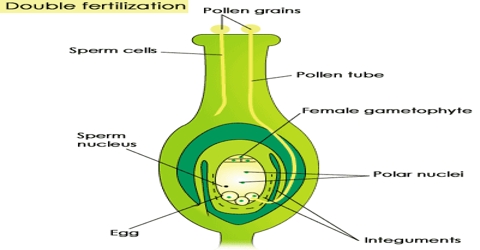 Fertilization is the union of two dissimilar sexual reproductive units called gametes (n). It is the act or process of initiating biological reproduction by insemination or pollination. The union of male and female gametes to form a zygote. The act or process of applying fertilizer. Fertilization can also refer to the act of adding outside nutrients to the soil around the plant or directly to the plant itself. In order for a plant to grow and bloom, it needs a number of dissimilar chemical elements.

(ii) The ovules are converted into seeds. The fertilized ovule goes on to form a seed, which contains a food store and an embryo that will later grow into a new plant.

(iii) The ovary is turned to fruit. The ovary develops into a fruit to protect the seed. Some flowers, such as avocados, only have one ovule in their ovary, so their fruit only has one seed.

(iv) The seeds formed by fertilization protect the generation of plants. Thus it is noticed that seeds and fruits are formed due to fertilization.

(v) Seeds and fruits formed due to fertilization are used as food for the animal kingdom.

(vi) Fertilization ensures diploid of the organism by fusion of haploid male and female gametes.

(vii) The fertilization process increases the metabolic activities and the rate of protein synthesis of the egg.

Fertilization is a significant concern because it is required in order to produce enough food for the increasing population from the decreasing cultivated land, but too much or improper use can be detrimental to the environment. Nitrogen, phosphorus and potassium availability is the big limit to growth. That is the goal of fertilizer.

Soil that is rich in nutrients is fertile. Replacing nutrients is the essential objective of fertilization. Soils feed the plants which in turn feed the animals that feed us. Soil provides the support or foundation for plants and most of the nutrients. As the soil components break down, elements are released and become available to plants as nutrients. However, naturally, this procedure takes a long time and the soil will only be a result of the parent material, climate, those living organisms once living there, topography, and time. Fertilization is supplementing the existing soil with additional, needed nutrients. Nitrogen, phosphorus, and potassium are vital because they are essential for these basic building blocks. Without nitrogen, phosphorus, and potassium, the plant just cannot grow because it cannot make the pieces it needs. To make plants grow faster, what you need to do is supply the elements that the plants need in readily available forms. For example:

Functions of Pericycle in Plants

Formation of Female Spore of Plants