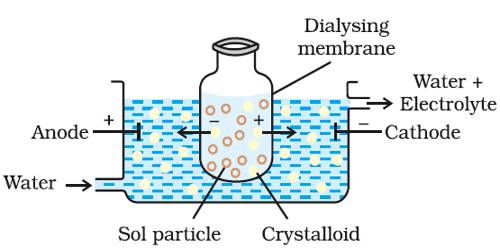 Purification of Colloids: Dialysis and Electrodialysis

After the preparation of the colloid, say, by a precipitation technique, it becomes necessary to remove the excess electrolyte from the sol to impart stability to the sol. One could think of filtering the colloidal system, wash the colloid, and re-disperse. But even the finest filter paper will retain little or none of the colloid. Electrolytes or other soluble materials in sols are removed by putting the sol in a membrane of cellophane or parchment surrounded by water as shown in Figure. The salts can pass through the membrane of parchment and are gradually washed away by the running water whereas the colloid-is left inside the Vessel. This process of separation of colloid and Graham’s `crystalloid’ is called dialysis. Graham himself insisted on the importance of dialysis. The assembly in which the dialysis is carried out is called a dialyzer. The process of separating the colloidal particles from those of crystalloids by diffusion of the mixture through a parchment or animal membrane is known as dialysis

The membrane through which dialysis is earned out serves as a sieve of extremely fine pore size so that only the small molecules or ions can pass but not the relatively larger colloidal particles or large molecules of high polymers. The membrane also controls such selective retention and passage due to the difference in diffusion and absorption. The dialysis can be frequently improved and made faster if the assembly is subjected to a suitable electric field. The migration of the ion of the electrolytes through the membrane becomes quite fast in the electric field and makes the process rapid. This is known as electrodialysis.

(1) Dialysis – The process in which the ions are removed from the solution by the phenomenon of diffusion through a permeable membrane is known as dialysis.

(ii) Its principle is based upon the fact that colloidal particles cannot pass through a parchment or cellophane membrane while the ions of the electrolyte can pass through it.

(iv) The distilled water is changed frequently to avoid an accumulation of the crystalloids otherwise they may start diffusing back into the bag.

(v) Dialysis can be used for removing from the ferric hydroxide sol.

(2) Electrodialysis – In this process dialysis of the colloidal solution is carried under the effect of an electric field. Some potential is applied between the metal screens that support the membranes.

(i) Due to this potential, the speed of the ions moving in the direction of the opposite electrodes is increased. Thus, the rate of dialysis is increased.

(ii) The ordinary process of dialysis is slow. However, it can be expedited by applying an electric field.

(iii) To increase the process of purification, dialysis is carried out by applying an electric field. This process is called electrodialysis.

(iv) Under the influence of the electric field, the impurity ions move faster to the oppositely charged electrodes and the process gets quickened.

(v) This method is not useful for non-electrolyte impurities like urea etc.