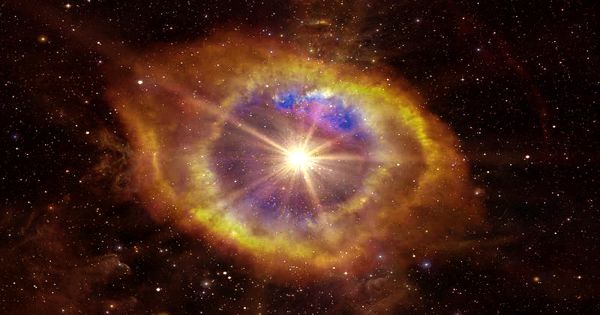 A scientist is tracing nearby supernova explosions back in time using an unexpected historical record: sudden spikes in radiation recorded in tree rings here on Earth. Massive explosions of energy happening thousands of light-years from Earth may have left traces in our planet’s biology and geology, according to new research by University of Colorado Boulder geoscientist Robert Brakenridge.

A dying massive star is not a peaceful event. It blasts off its outer material in a colossal explosion, irradiating space with high-energy gamma radiation for several years. University of Colorado geoscientist Robert Brakenridge traced several of the supernovas that happened near our solar system over the past 40,000 years and, by looking at coinciding tree rings, concluded that exploding stars can have major impacts on climate and the environment. His research, published last week in the International Journal of Astrobiology, helps clarify how cosmic events can affect us on Earth.

University of Colorado geoscientist Robert Brakenridge traced several of the supernovas that happened near our solar system over the past 40,000 years and, by looking at coinciding tree rings, concluded that exploding stars can have major impacts on climate and the environment.

Supernova! It’s the largest explosion that takes place in space, but how do the deaths of giant stars in our own galaxy affect Earth and other planets? Tree rings provide a record of how many radioactive isotopes reach Earth’s atmosphere from space. There are a few historical spikes of these isotopes that can’t be explained by anything happening on Earth. In the study, Brakenridge found that several seem to line up with stars violently exploding. This new research suggests that Earth’s ancient trees may contain evidence of these celestial explosions.

“These are extreme events, and their potential effects seem to match tree ring records,” Brakenridge said in a press release. He hopes that humanity won’t have to see those effects for itself anytime soon. Some astronomers think they’ve picked up signs that Betelgeuse, a red giant star in the constellation Orion, might be on the verge of collapsing and going supernova.

Interestingly, it’s quite hard to tell how often stars in the Milky Way explode. Several different techniques have suggested that there should be one to three local supernovae per century, but the most recent Milky Way supernova observation on record was more than 400 years ago.

The spikes suggest that supernovas can weaken the ozone layer and change the Earth’s climate. However, the work isn’t definitive. Other researchers have suggested solar flares could be the culprits, and it’s difficult to precisely date supernova explosions, so the cosmic events may not align with tree rings as neatly as it seems.

Brakenridge and his team found what could be the fingerprints of ancient nearby supernovae in tree rings dating back to 40,000 years ago. And in the last 15,000 years, their results indicate, there could have been four supernovae close enough to Earth to leave their signature in the trees.

“We’re seeing terrestrial events that are begging for an explanation,” Brakenridge said in the release. “There are really only two possibilities: A solar flare or a supernova. I think the supernova hypothesis has been dismissed too quickly.”