Home Astronomy A Unique Exoplanet has been Discovered by Satellite CHEOPS 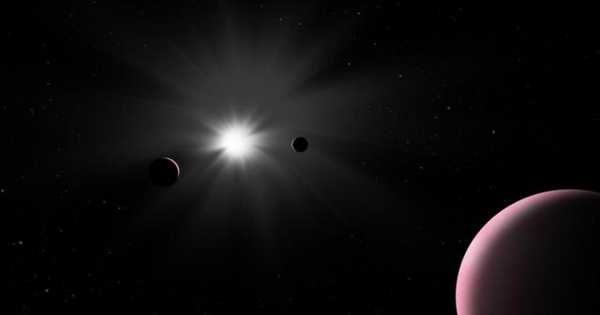 The European Space Agency’s (ESA) exoplanet-hunting satellite CHEOPS, in which the Instituto de Astrofisica de Canarias (IAC) and other European institutions are participating, has unexpectedly detected a third planet passing in front of its star while exploring two previously known planets around the same star. According to researchers, this transit will reveal exciting details about a strange planet “without a known equivalent.”

The discovery is one of the first CHEOPS (CHaracterising ExOPlanet Satellite) results, and it is the first time an exoplanet with a period longer than 100 days has been seen transiting a star bright enough to be seen with the naked eye. The discovery was made today and published in the journal Nature Astronomy.

Nu2 Lupi, a bright star similar to the sun, is located in the constellation Lupus, about 50 light-years from Earth. In 2019, the European Southern Observatory’s (ESO) HARPS (High Accuracy Radial Velocity Planet Searcher) in Chile discovered three exoplanets in this system (called b, c, and d) with masses between Earth and Neptune and orbital periods of 11.6, 27.6, and 107.6 days, respectively. Following that, NASA’s TESS satellite, which is designed to detect transiting planets, discovered that two interior planets, b, and c, transit Nu2 Lupi, making it one of only three naked-eye stars with more than one transiting planet.

“Transiting systems like Nu2 Lupi are extremely important in our understanding of how planets form and evolve because they allow us to compare several planets around the same bright star in great detail,” says Laetitia Delrez, a researcher at the University of Liege (Belgium) and the article’s first author.

An exoplanet-hunting satellite has unexpectedly detected a third planet passing in front of its star while it was exploring two previously known planets around the same star. This transit, according to researchers, will reveal exciting details about a strange planet without a known equivalent.

“Our plan was to use CHEOPS to observe planets b and c passing in front of Nu2 Lupi, but during a transit of planet c, we were surprised to see an unexpected transit of planet d, which is further out within the system,” she adds.

Planetary transits provide an excellent opportunity to study their atmospheres, orbits, sizes, and compositions. When a transiting planet passes in front of its star, it blocks out a tiny but detectable portion of its star’s light, and it was this tiny drop in light that led the researchers to their discovery. Because exoplanets with long periods orbit so far away from their stars, the possibility of detecting a planet during transit is extremely remote, making the CHEOPS discovery all the more surprising.

Planet d was discovered to have a radius 2.5 times that of the Earth, and its orbital period around its star was confirmed to be a little more than 107 days using the high precision techniques of CHEOPS. Furthermore, its mass could be estimated to be 8.8 times that of the Earth using archive observations from terrestrial telescopes.

“In comparison to many other known exoplanets, the amount of radiation from the star that falls onto planet d is quite small. Nu2 Lupi d would orbit between Mercury and Venus if it were in our solar system “says Mahmoudreza Oshagh, an IAC senior postdoctoral researcher and paper co-author. “When combined with its bright parent star, long orbital period, and ideal location for follow-up, planet d is very exciting: it is an exceptional object with no known equivalent, and it will undoubtedly be a fundamental object for future studies.”

The majority of long-period transiting exoplanets discovered to date are orbiting stars that are too faint to allow detailed follow-up observations, so we know very little about their properties. Nu2 Lupi, on the other hand, is bright enough to attract the attention of other powerful space telescopes, including the NASA/ESA Hubble Space Telescope, the future James Webb Space Telescope, and major ground-based observatories. “Given its general properties and orbit, planet d will be an exceptionally favorable target for studying an exoplanet with a moderate atmospheric temperature around a star similar to the Sun,” Laetitia Delrez adds.

Combining new CHEOPS data with archive data from other observatories, the researchers discovered that planet b is mostly rocky, whereas planets c and d appear to have a lot of water surrounded by hydrogen and helium gas. In fact, planets c and d have much more water than Earth, with water accounting for one-quarter of each planet’s mass, compared to less than 0.1 percent on Earth. This water, however, is not a liquid; it is high-pressure ice or high-temperature water vapor.

“Although none of these planets are habitable, their diversity makes the system very exciting and a great future perspective to show how these bodies formed and how they have changed over time,” says Enric Pallé, an IAC researcher and co-author of the paper. “We can also search for rings or moons within the Nu2 Lupi system, because the extreme accuracy and stability of CHEOPS may allow us to detect bodies as large as Mars.”

CHEOPS is intended to collect high-precision data on individual stars known to host planets, rather than to conduct a broader survey of potential exoplanets around many stars. This method and accuracy are proving extremely useful in understanding the planetary systems that orbit the stars around us.

“These exciting results demonstrate yet again the significant potential of this satellite,” says Enric Pallé. CHEOPS will not only improve our understanding of known exoplanets, but it will also enable us to discover new ones and reveal their secrets, as demonstrated by this result and others in the mission’s early stages.”