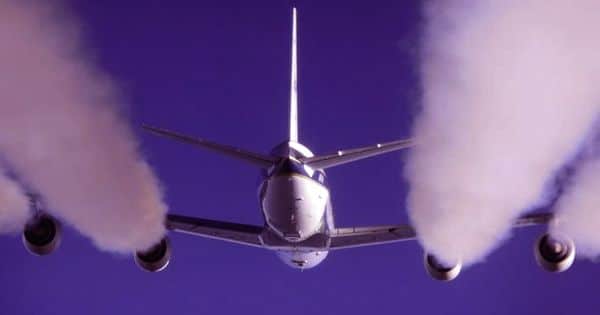 For the first time ever, aircraft data obtained by commercial airlines have the ability to lead to the monitoring of greenhouse gas pollution – a significant step in handling the reduction of those emissions. Cities are responsible for more than 70% of global cumulative greenhouse gas (GHG) emissions. The potential to track urban GHG pollution is an essential capacity to build to promote climate change efforts in response to the Paris Agreement. The research community has reviewed data obtained from numerous sources, such as ground-based aircraft and satellites, in order to develop a science-based tracking capability. The international study team, which included the Universities Space Research Association (USRA) Tomohiro Oda, looked at carbon dioxide (CO2) data obtained by Japanese commercial airlines in 34 global cities.

Hidekazu Matsueda, the co-author of the study and researcher at the Meteorological Research Institute, Japan, said: “Following the aircraft measurements conducted between Tokyo and Australia that I began in 1993 and continued throughout my career, the CONTRAIL program has continually extended its global network and provided numerous data to understand the carbon budget of this world. In this study, the team analyzed thousands of vertical ascending and descending measurements collected over airports and to characterize CO2 emissions variations over 34 major cities worldwide for the first time.

The team has recently studied thousands of vertical ascending and descending measurements over airports and characterized CO2 differences for the first time in 34 major cities worldwide. Airports are also situated near to major cities to ensure easy entry. The CONTRAIL aircraft fly up and down Narita International Airport almost every day and are able to obtain the atmospheric chemical signature of the Greater Tokyo Area.

With comparable geographic positions of major airports compared to large urban centers, the research team analyzed data gathered around global airports in order to retrieve urban CO2 emission signatures from the data. “We analyzed millions of observational data collected at and around the Tokyo Narita Airport and found clear CO2 enhancements when the wind comes from the Greater Tokyo Area,” said Taku Umezawa, lead author of the study and researcher at the National Institute for Environmental Studies, Japan. “That was also the case globally for other airports, such as Moscow, Paris, Beijing, Osaka, Shanghai, Mexico City, Sydney, and others.”

The team also examined the magnitude of CO2 variability in the lowermost atmosphere over these airports. “Short-term changes in the CO2 concentration in the lower atmosphere are associated with various factors such as the upwind pattern of CO2 emissions and uptakes, flight path and its geographical position relative to the locations of emissions and uptakes, and meteorological conditions during each landing and takeoff,” said Kaz Higuchi, co-author of the study and assistant professor at Environmental Sciences. “Despite these complex conditions under which the measurements are made, it was very interesting that we found a relationship between the magnitude of CO2 variability and CO2 emissions from a nearby city.” The findings indicate that commercial airline-based CO2 datasets can reliably provide urban emission estimates when combined with the atmospheric modeling system.

“But still there are missing pieces to examine the physical link to city emissions to establish urban monitoring,” said Tomohiro Oda, a scientist at the Universities Space Science Association, Maryland, USA, who worked with the team as a PI for the NASA-funded emission modeling project. “Cities are considered to be responsible for more than 70% of global human-made greenhouse gas emissions. The precise estimate of CO2 emissions from urban areas is therefore critical for successful pollution control strategies.” This study indicates that commercial airline measurements will collect valuable urban CO2 data that supplement the data collected from other observational platforms, such as ground stations and satellites, in order to track city CO2 emissions.

The benefit of commercial airliners is that there is a broad global spatial coverage of measurements even in regions where there are only scarce greenhouse gas measurement networks, especially in areas where securing ground-level measurements are difficult, such as in developing countries. “A further implementation of similar CO2 instruments into other domestic and international flights will significantly extend our global monitoring capability of cities,” said Toshinobu Machida, group leader of the CONTRAIL program and leader of the Office for Atmospheric and Oceanic Monitoring at the National Institute for Environmental Studies.