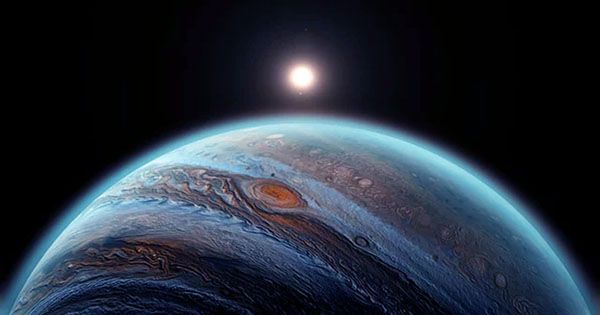 Incredibly high-quality infrared photos of Jupiter were produced by JWST during its commissioning phase for the first time. The first legitimate scientific images of the gas giant that were revealed today, however, far outweigh those earlier pictures. With the newly released data, we can now see the planet’s rings, several of its moons, and even aurorae in addition to structures in Jupiter’s tumultuous atmosphere. The pictures are truly amazing.

JWST uses infrared light, which is not visible to our eyes, to study the universe. Three different filters are used to transfer the colors in these photos onto the visible colors. In comparison to the longer wavelength delineated in red, blue has the shortest infrared wavelength and the hotter regions.

The aurorae and portions of the high-altitude hazes are mapped in red in the Jupiter-focused view above. Green or yellow hazes and deeper cloud levels can be seen. The blue areas are the deepest. Reflected sunlight is the cause of the white areas, which are similar to the Great Red Spot’s center.

The gas giant’s incredibly thin ring system, its inner moons Amalthea and Adrastea, which are the second and third fastest moons in the Solar System, as well as a diffraction spike from the volcanic moon Io can all be seen in the broader image above. What about the fuzziness all around it? They are far-off galaxies photobombing the Solar System’s largest planet.

Although it took JWST more than ten years to reach space, the amazing photos we are now seeing more than makeup for the delay.