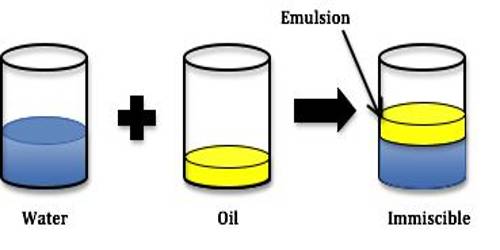 An emulsion is a dispersion of one liquid into another liquid in the form of small globules. Emulsions are generally prepared by dispersion methods. Most emulsions are prepared by mixing the two liquids along with a suitable emulsifier and then passing the mixture through a colloid mill or a similar appliance. One of the liquids, mainly decided by the emulsifier, is broken down by the shearing forces into small globules and an emulsion results. The continental method is used to prepare the initial or primary emulsion from oil, water, and a hydrocolloid or “gum” type emulsifier (usual acacia). It can either be oil-in-water (O/W) or water-in-oil (W/O), be depending on whether the continuous phase is the water or the oil, respectively. In other methods, the liquid to be dispersed is forced through a narrow capillary and injected directly into the dispersion medium containing the emulsifier as shown in Figure. 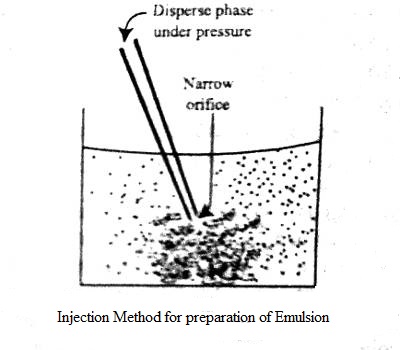 Under the pressure in the nozzle, the dispersed phase is broken down into small globules giving rise to an emulsion. The emulsifier could also be dissolved in the dispersed phase. The most common example of the emulsion is milk where small fat globules are dispersed in water, protein brings the principle stabilizer.