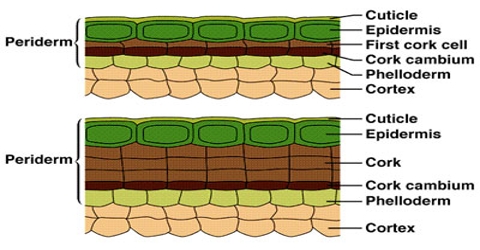 The periderm is composed of the phellogen, phellem, and phelloderm. It is outer defensive secondary tissue formed replacing the epidermis. In woody plants, with the development of the key stem in thickness, new layers of cork cambium, and therefore sequential periderms, are formed in the secondary phloem, cutting off old non-functional phloem tissues. 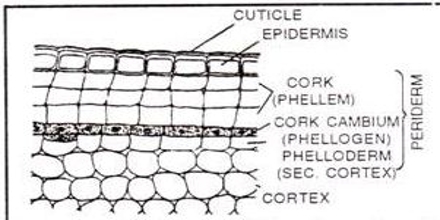 The formation of periderm occurs throughout secondary growth. During this procedure, to replace the broken outer epidermal layer and the cortical layer, the cells of the cortex turn meristematic.

(i) At the advent of extra-stelar secondary growth, the cells of the outer most layer of the hypodermis turn into phellogen or cork cambium after having incapable of cell division. The cells of the outer side give an increase to the phellem or cork which due to the deposition of suberin in its cell wall is impervious to water. Likewise, the inner side forms the secondary cortex or phelloderm which is primarily parenchymatous in nature.

(ii) The cells of the phellogen or cork cambium undergo division and form cork cells or phellem towards the peripheral region and phelloderm or secondary cortex towards the inner side. During secondary growth, the outer epidermal layer and the cortical layer are broken because of the cambium. When one cork cambium causes its function, another new one appears in the inner tissues. It is composed of thin-walled, narrow and rectangular cells.

(iii) Generally, it is created to protect the plant by the development of the extra layer. The periderm forms from the phellogen which serves as a lateral meristem. The periderm replaces the epidermis and acts as a protective covering like the epidermis. Mature phellem cells have suberin in their walls to protect the stem from desiccation and pathogen attack. Older phellem cells are dead, as is the case with woody stems.

The meristematic tissue which grows to reinstate the worn-out epidermis of dicot stem is called cork cambium or phellogen. The phellogen cuts off cells on both sides. The outer cells distinguish into cork or phellem. The inner cells distinguish into the secondary cortex or phelloderm. Cork is impervious to water due to suberin deposition in the cell wall. The cells of the secondary cortex are parenchymatous. Phellogen, phellem, and phelloderm are collectively called periderm.

Periderm consists of three-layered tissue structure whose sequence is variable in stems but common in roots.

Different parts of a Flower

Formation and Function of Bark