The melting point starts off low, gradually increases to a peak (at group 14) then gradually decreases to a very low value (at group 0 or 18). How can we explain this trend? Think about the strength of the forces between the molecules.

By studying the bonding in each group of elements we can explain the range of melting points. The melting point temperature of a solid is a measure of the amount of energy needed to break the bonds which hold the basic particles (atoms or molecules) together. So high melting points indicate strong bonds are being broken. 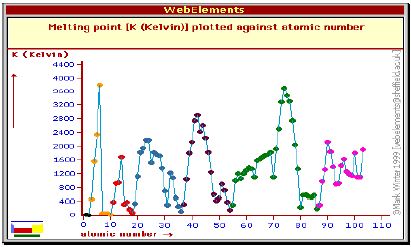 The graph of melting point against atomic number has a similar shape to the density graph, as the strength of the interatomic bonds affects both properties in a similar way.

Why Hydrobromic Acid (HBr) is a Polar Compound?