Dr. Shamsuzzoha was a prominent teacher in Rajshahi University. He attained martyrdom in the pre-liberation period. A flame of protest spread out after Sergeant Zohurul Hague was killed. On February 17, section 144 was imposed in Rajshahi city. The students joined the protest and took out a procession. They were locked in a clash with police in front of Rajshahi Medical College. As a result many students were injured. Dr. Zoha, a Professor of chemistry and Proctor of the university heard this. He rushed to the spot and took the injured students to hospital. Next morning on Friday 18, tension grew on the campus. The students were preparing to violate section 144 again. The armed forces were deployed in front of the university main gate. The gate was locked to prevent the agitating students. The students however started jumping over the gate and scaled the walk.

His death added a new dimension in the anti-Ayub mass movement, as well as the fall of Ayub government was quickened. For his great sacrifice in the way of country’s independence, Dr. Zoha today is not only a name, he is the legend in the history of liberation. 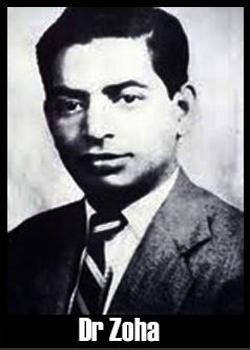