Home Literature A Little Learning is a Dangerous Thing 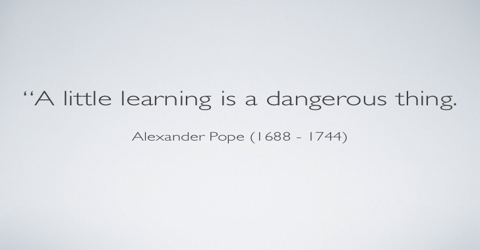 A Little Learning is a Dangerous thing

There lived a man in a village. He had a great attraction to English and so he went to a teacher. The teacher began to teach him, but the man was dull-headed. His teacher tried his best to teach him English but the man could not understand the rules of grammar. However, the teacher released him. The man grasped only three English words. He learned ‘yes’, ‘no’ and ‘very well’. But the man did not know their meaning. He came to his own village and told the villagers that he was well versed in English. He used the three words while speaking with any man. If anybody asked him any question or discussed a thing with him, he would say either yes or no or “very well”.

From the story noted above we learn the moral that the man with a little learning in English brought ruin on himself. He courted his own disaster.