Home Literature A True Friend and a False Friend 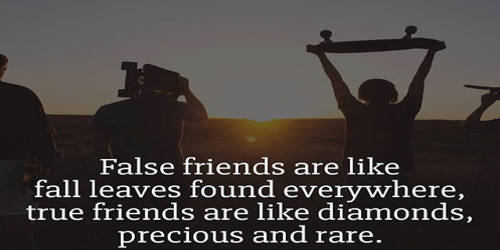 Once there were three friends in a forest. They were a deer, a crow, and a jackal. One day the crow saved the deer from a hunter. Since that day the crow and the deer were great friends.

One day the jackal took the deer to a field to eat corn. The deer began to eat the corn from that field every night. One night the farmer set a net. The deer did not see the net and walked into it. The jackal saw the deer on the net but did not help him. He said to himself, “The farmer will cut the deer into pieces and throw away some pieces of bones and flesh. Then I shall have a good meal.” The jackal then hid in a bush.

The crow could not find his friend, the deer, that night, “The deer must be in danger.” he thought. So he began to search for his friend. After searching for a long time he found him caught in the net.

“Dear crow,” said the deer, “Your words have come true. We must not make friends with strangers. The jackal is a false friend. He brought me here and now I can’t get out of the net.”

“I will save your life,” said the crow. In the morning the crow saw the farmer coming towards the field.

“Lie down on the ground and pretend to be dead,” said the crow to the deer. ‘When you hear me cawing, please jump up and run away as fast as you can.” The crow then sat on the deer’s head and pretended to strike him with his beak.

The farmer saw the deer and thought him to be dead. He then took the deer out of the net. put it aside and began to fold up the net.

The crow at once cawed. The deer jumped up and ran away as quickly as he could. The farmer took up his club and threw it at the deer. It did not.hit the deer but it hit the jackal behind in the bush and it dropped down dead.

MORAL: ALWAYS STAY AWAY FROM SUCH FALSE FRIENDS AND LISTEN TO THE PEOPLE WHO LOVE YOU.

Moral Story: Grasp all, Lose all