George Washington was the first President of the U.S.A. He was born in 1732 in Virginia. His family used to cultivate tobacco in their estates in Virginia. When George Washington was twenty years old, he took over these estates and lived a comfortable life. In 1752 France and Britain started war. Then George Washington left his estates and joined the English forces. He soon made a good name for himself as a brilliant officer. In 1773 the unpleasant incident known as Boston Tea Party took place between the Americans and the British Thirteen colonies joined into a Congress in 1774. In 1775 some English troops were attacked and a war broke out. In 1776 the colonies formally declared themselves independent. Peace treaty was signed between America and Britain in 1783. When England and France made peace he went to his home of Virginia to live happily. In 1789 Washington became the first President of the United States.

In the American War of Independence, a Corporal and a party of soldiers were sent to raise a heavy beam for a batten There were too few men for the work. But the Corporal was full of his dignity. He did nothing but stood by and shouted orders. Presently an officer, not in uniform, rode up. “Hello,” he said to the Corporal. “Why don’t you give your men a hand to get that beam up’)” “Don’t you know that I am a Corporal’) was the reply. “Are you?” said the officer. He then got down from his horse and joined the men. He worked till the sweat came down his face. When the beam had been put to its place, he made a low bow to the Corporal. “Good day. Mr Corporal. Next time when you have too few men for this kind of work, send for the Commander-in-Chief. And I shall be ham to help you again.” it was Washington himself.

Awards: Congressional Gold Medal and Thanks of Congress 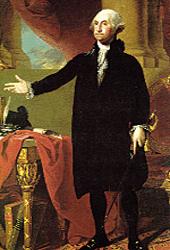