Home Literature A Friend in Need is a Friend Indeed 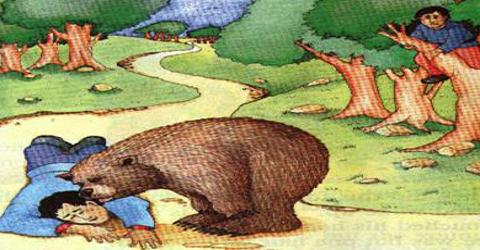 A friend in need is a friend indeed

There were two friends. They lived in a certain village. They promised that they would help each other at the time of danger. One evening they were passing through an African forest. All on a sudden they saw a bear. One of the friends at once climbed up a tree. The other friend did not know how to climb a tree. He was sure that the bear would tear him into pieces. Suddenly he remembered that the bear does not eat a dead animal. So he lay down on the ground just like a dead man.

The bear came and smelt his body. The friend stopped breathing. The bear thought that he was dead and went away. Then the first friend got down from the tree and came to the second friend. He greeted his friend, saying – “Thank God that you are saved. My friend, I saw the bear put its mouth very close to your ear. Did it say anything to you?” He said, “The bear told me not to keep a friend who deserts in danger; because a friend in need is a friend indeed.

This proverb means that ‘a friend who helps his friend in need is a real friend’. the proverb could be taken to mean that ‘friends rely on each other’.

One cannot Live by Pretension