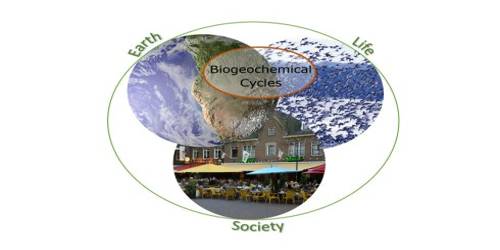 The sun is the basic source of energy on which all life depends. This energy initiates life processes in the biosphere through photosynthesis, the main source of food and energy for green plants. During photosynthesis, carbon dioxide is converted into organic compounds and oxygen. Out of the total solar insolation that reaches the earth’s surface, only a very small fraction (0.1 percent) is fixed in photosynthesis. More than half is used for plant respiration and the remaining part is temporarily stored or is shifted to other portions of the plant.

Life on earth consists of a great variety of living organisms. These living organisms exist and survive in a diversity of associations. Such survival involves the presence of systemic flows such as flows of energy, water, and nutrients. These flows show variations in different parts of the world, in different seasons of the year and under varying local circumstances. Studies have shown that for the last one billion years, the atmosphere and hydrosphere have been composed of approximately the same balance of chemical components. This balance of the chemical elements is maintained by a cyclic passage through the tissues of plants and animals. The cycle starts by absorbing the chemical elements by the organism and is returned to the air, water, and soil through decomposition. These cycles are largely energized by solar insolation. These cyclic movements of chemical elements of the biosphere between the organism and the environment are referred to as biogeochemical cycles. Bio refers to living organisms and geo to rocks, soil, air and water of the earth. 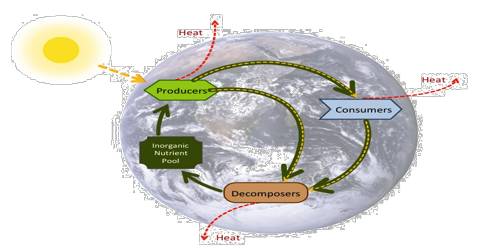