The most widely used classification of climate is the empirical climate classification scheme developed by V. Koeppen. Its categories are based on the annual and monthly averages of temperature and precipitation. Koeppen identified a close relationship between the distribution of vegetation and climate. He selected certain values of temperature and precipitation and related them to the distribution of vegetation and used these values for classifying the climates. It is an empirical classification based on mean annual and means monthly temperature and precipitation data. He introduced the use of capital and small letters to designate climatic groups and types. Although developed in 1918 and modified over a period of time, Koeppen’s scheme is still popular and in use.

Table-1: Climatic Groups According to Koeppen

Koeppen recognized five major climatic groups, four of them are based on temperature and one on precipitation. Table- 1 lists the climatic groups and their characteristics according to Koeppen. The capital letters: A, C, D, and E delineate humid climates and B dry climates.

The climatic groups are subdivided into types, designated by small letters, based on the seasonality of precipitation and temperature characteristics. The seasons of dryness are indicated by the small letters: f, m, w and s, where f corresponds to no dry season, m – monsoon climate, w- winter dry season and s – summer dry season. The small letters a, b, c, and d refer to the degree of severity of temperature. The B- Dry Climates are subdivided using the capital letters S for steppe or semi-arid and W for deserts. The climatic types are listed in Table- 2. The distribution of climatic groups and types is shown in Table- 2. 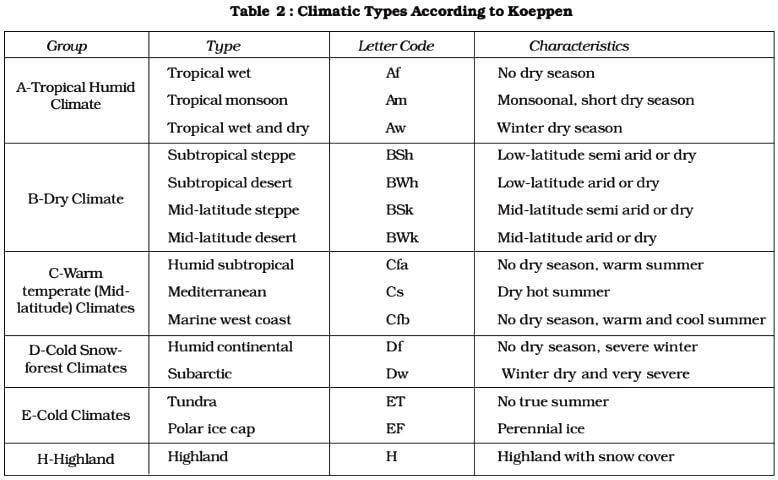 Surface Pressure and Winds in the Winter Season