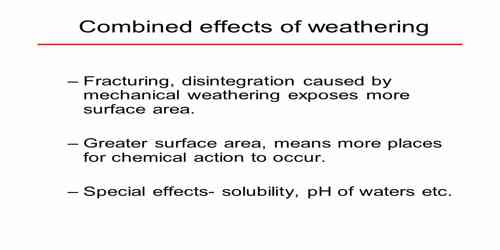 Weathering is the breakdown and amendment of minerals and rocks near or at the earth’s surface. The three forms of weathering are physical or mechanical, biological and chemical. This has already been explained under physical weathering processes of unloading, thermal contraction and expansion and salt weathering.

This shapes the earth’s surface through such processes as decomposition, wearing down, and cracking from root growth or freezing and thawing. Each procedure has a distinct effect on rocks and minerals. When rocks start to break down, the solid rocks beneath become affected by wind, rain, snow, and ice. Physical, chemical and biological processes also begin to contribute to the breakdown of the rocks, leading to the formation of the precious soil. Exfoliation is a result but not a process. Flaking off of more or less curved sheets of shells from over rocks or bedrock results in smooth and rounded surfaces. Exfoliation can occur due to expansion and contraction induced by temperature changes. Exfoliation domes and tors result due to unloading and thermal expansion respectively.