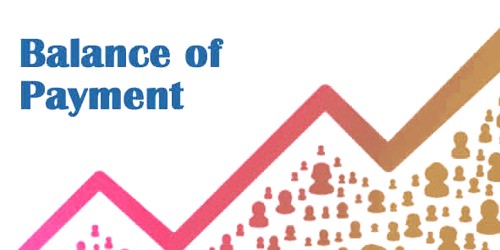 Balance of Payment is a systematic record of all economic transactions which take place among the individuals of a country and the rest of the world.

A comprehensive set of accounts that tracks the flow of currency and other monetary assets coming in to and going out of a nation. These payments are used for international trade, foreign investments, and other financial activities. The balance of payments is divided into two accounts – current account (which includes payments for imports, exports, services, and transfers) and capital account (which includes payments for physical and financial assets). A deficit in one account is matched by a surplus in the other account. The balance of trade is only one part of the overall balance of payments set of accounts.

(a) A country’s Balance of Payments reveals various aspects of a country’s international economic position. It presents the international financial position of the country. If the economy needs support in the form of imports, the government can prepare suitable policies to switch the funds and technology imported to the critical sectors of the economy that can constrain potential growth.

(b) It helps the government in taking decisions on monetary and fiscal policies on the one hand, and on external trade and payments issues on the other. It analyses the business transactions of any economy into exports and imports of goods and services for an exacting financial year. Here, the government can recognize the areas that have the possible for export-oriented growth and can prepare policies supporting those domestic industries.

(c) In the case of a developing country, the balance of payments shows the extent of dependence of the country’s economic development on the financial assistance by the developed countries. The government can also use the indications from Balance of Payments to discern the state of the economy and formulate its policies of inflation control, monetary and fiscal policies based on that.

(e) However, a country’s favorable balance of payments cannot be taken as an indicator of economic prosperity nor the adverse and even the unfavorable balance of payments is not a reflection of bankruptcy. The government can adopt some defensive measures such as advanced tariff and duties on imports so as to discourage imports of non-essential items and encourage the domestic industries to be self-sufficient.

(h) It does not provide data about assets and liabilities that relate one country to others. However, despite all these shortcomings, the significance of the balance of payments lies in the fact that it provides vital information to understand a country’s economic dealings with other countries.

(j) If the country has a flourishing export trade, the government can adopt measures such as the devaluation of its currency to make its goods and services available in the international market at cheaper rates and bolster exports.

Why Companies engage in international business?