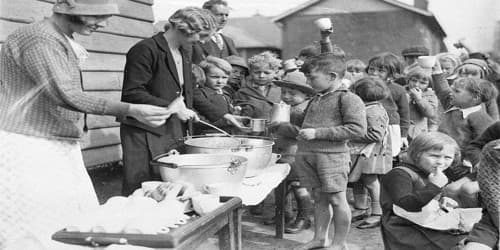 The Great Depression was a severe worldwide economic depression in the 1930s. The timing of the Great Depression varied across nations, but in most countries, it started g 1929 and lasted until the late 1930s. It was the longest, deepest, and most widespread depression of the 20th century.

Worldwide GDP fell by 15% from 1929 to 1932. In the 21st century, the Great Depression is commonly used as an example of how far the world’s economy can decline. The depression originated in the United States, after the fall in stock prices that began around September 4, 1929, and became worldwide news with the stock market crash of October 29, 1929 (known as Black Tuesday).

The Great Depression had devastating effects in countries rich and poor. Personal income, tax revenue, profits, and prices dropped, while international trade plunged by more than 50%. Unemployment in the U.S. rose to 25% and in some countries rose as high as 33%.

Causes of the Great Depression

One of the critical faults that led to the Great Depression was overproduction. This was not just a problem in industrial manufacturing, but also an agricultural issue, American farmers were producing far more food than the population was consuming. As farmers expanded their production to aid the war effort during World War-1 they also mechanized their techniques, a process which both improved their output but also cost a lot of money, putting farmers into debt. Furthermore, land prices for many farmers dropped by as much as 40 percent – as a result, the agricultural system began to fail throughout the 20s, leaving large sections of the population with little money and no work. Thus unemployment rise and food production fall.

As already suggested, in America there was a widening disparity between those earning lots of money and those still struggling in relative poverty. The top one percent of workers in 1929 saw their income rise by 75 percent; the bottom 99 percent meanwhile only enjoyed a 9 percent rise in wages. So while industrial production rose by 50 Percent at the end of the 1920s, wages did not keep pace meaning the expendable income was not available to purchase what was being created. While often said to have been the ‘Roaring Twenties’, this was not common to the entire population and this gap between the wealthy and the poor – the latter making up the vast majority of the country an underlying factor in why the US economy collapsed in on itself.

Rather than try to jumpstart the economy by pushing the Federal Reserve System to lend money to banks at low-interest rates and pumping money into the economy through federal public works projects, the Hoover Administration did nothing at first, then took small and tentative actions that weren’t enough to head things off.

Many American farmers were already having a hard time before the Depression, mostly because they were producing too much and farm product prices were too low. The situation was so bad in some areas that farmers burned corn for fuel rather than sell it.

(e) Too many poor people

While the overall economy had soared in the 1920s, most of the wealth was enjoyed by relatively few Americans. In 1929, 40 percent of the families in the country were still living at or below the poverty level. That made them too poor to buy goods and services and too poor to pay their debts. With no markets for their goods, manufacturers had to lay off tens of thousands of workers, which, of course, just created more poor people.

Many small banks, particularly in rural areas, had overextended credit to farmers who, for the most part, had not shared in the prosperity of the 1920s and often could not repay the loans. Big banks, meanwhile, had foolishly made huge loans to foreign countries.

When times got tough and U.S. banks stopped lending, European nations simply defaulted on their outstanding loans. As a result, many banks went bankrupt. Others were forced out of business when depositors panicked and withdrew their money. The closings and panics almost completely shut down the country’s banking system.

The decision to return to and then stick with the gold standard after WWI by Western nations is often cited as a key factor in the outbreak of the Great Depression. The gold standard is a system in which money is fixed against an actual amount of gold. In order for it to work, countries need to maintain high-interest rates to attract international investors who bought foreign assets with gold. When this stops, as it did at the start of the 1930s, governments often must abandon the gold standard to prevent deflation from worsening — but when this decision had to be made by all countries in order to maintain fixed exchange rates it wasn’t, and the delay in abandoning the gold standard let economic problems worsen and the size and scale of the Great Depression increase.

Effect of the Great Depression

The most devastating impact of the Great Depression was human suffering. In a short Period of time, world output and standards of living dropped precipitously. As much as one-fourth of the labor force in industrialized countries was unable to find work in the early 1930s. While conditions began to improve by the mid-1930s, total recovery was not accomplished until the end of the decade.

The Great Depression and the policy response also changed the world economy is crucial ways. Most obviously, it hastened, if not caused, the end of the international gold standard.

Why one should study International Business?