Home Business Causes of Disequilibrium in the Balance of Payments 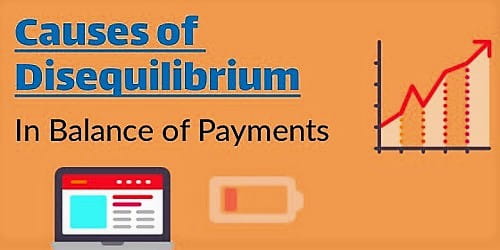 Balance of payments is a record of economic transactions between the residents of one country and the rest of the world during the course of one year. The items which lead to an inflow of foreign earnings are placed on the credit side of the balance sheet, whereas the items which give rise to an outflow of foreign currency are placed on the debt side. It reflects a clear picture of the economy and provides a holistic picture. It gives the details of foreign exchange received or foreign exchange spends on various accounts.

Developing countries are importing capital goods to industrialize the economy. Due to this reason, the balance of payment remains unfavorable. An important cause of small exports is inflation or rising prices in the country. If it is not matched by other items in the balance of payments, disequilib­rium emerges.

The imports of industrial raw material in the aggregate import are placed at 50%.

Developing countries are mostly consumption oriented. Due to this reason, most of the goods which are produced within the country are consumed locally. The exportable surplus is on the decline. Natural calamities such as floods, earthquakes, and diseases cause disequilibrium in the balance of payment as they unfavorably affect farming and manufacturing production in the country.

Due to inflation in developing countries like Pakistan, the price of exportable goods are very high. Their goods face difficulties to compete in the international market and balance of payment remain unfavorable. An increase in price levels and income leads to rapid economic development in developing countries. This increases imports and reduces exports leading to a deficit in the balance of payment.

Developing countries are facing political uncertainty which is the main cause of low production, as well as a balance of payment, remain unfavorable. Experience shows that political instability and disturbances cause large capital outflows and hinder Inflows of foreign capital.

Developing countries are undertaking huge programmers of development of industry, agriculture, transport, education, communication, irrigation, and electricity. For this purpose, various kinds of raw material and machinery are needed. So the balance of payment remains unfavorable.

There may be temporary disequilibrium caused by random variations in trade due to seasonal fluctuations, the effects of weather on agriculture: production, etc. Deficits in the balance of payment due to variations in trade are expected to correct within a short time.

Due to this reason in the domestic industries or in the industries of the other countries may affect the country’s ability to compete in the home or foreign market. This may be due to toil changes in costs and prices and the quality of products following technological, improvement.

Do you think WTO is reducing trade protection?