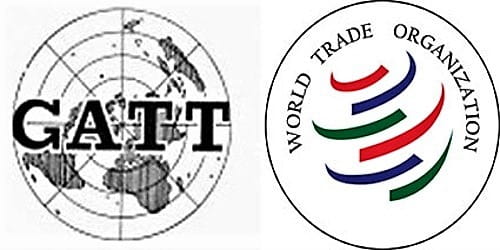 General Agreement on Tariffs and Trade (GATT), set of multilateral trade agreements aimed at the abolition of quotas and the reduction of tariff duties among the contracting nations. When GATT was concluded by 23 countries at Geneva, in 1947 (to take effect on Jan 1, 1948), it was considered interim arrangement pending the formation of a United Nations agency to supersede it. When such an agency failed to emerge, GATT was amplified and further enlarged at several succeeding negotiations. It subsequently proved to be the most effective instrument of world trade liberalization, playing a major role in the massive expansion of world trade. It’s a free market agreement between a huge number of countries in the world that aims to make free markets the standard, rather than the exemption, by abolishing most import tariffs and trade barriers between signing countries.

The World Trade Organization (WTO) is an organization that intends to supervise and liberalize international trade. The organization officially commenced on 1 January 1995 under the Marrakech Agreement, signed by 123 nations on 15 April 1994, replacing the General Agreement on Tariffs and Trade (GATT), which commenced in 1948. The first WTO ministerial conference was held in 1996 in Singapore, which focused on the execution of agreements to date but also began to consider topics relevant to international trade not yet in the ambit of the WTO, such as investment, trade facilitation, and competition laws.  The organization deals with regulation of trade between participating countries by providing a framework for negotiating and formalizing trade agreements and a dispute resolution process aimed at enforcing participants’ adherence to WTO agreements, which are signed by representatives of member governments and ratified by their parliaments. Most of the issues that the WTO focuses on derive from previous trade negotiations, especially from the Uruguay Round (1986-1994). GATT restored economic health to the world after the devastation of the depression and World War II. 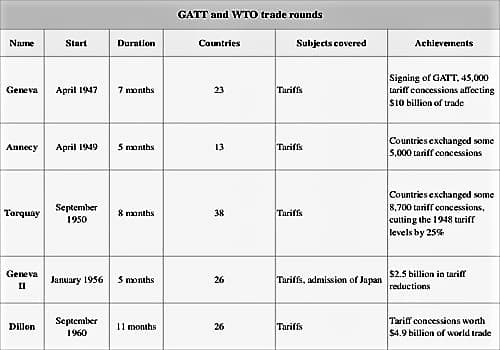 The organization is attempting to complete negotiations on the Doha Development Round, which was launched in 2001 with an explicit focus on addressing the needs of developing countries. As of June 2012, the future of the Doha Round remained uncertain; the work program lists 21 subjects in which the original deadline of 1 January 2005 was missed, and the round is still incomplete. The conflict between free trade on industrial goods and services but retention of protectionism on farm subsidies to the domestic agricultural sector (requested by developed countries) and the substantiation of the international liberalization of fair trade on agricultural products (requested by developing countries) remain the major obstacles. These points of contention have hindered any progress to launch new WTO negotiations beyond the Doha Development Round. As a result of this impasse, there has been an increasing number of bilateral free trade agreements signed. As of July 2012, there were various negotiation groups in the WTO system for the current agricultural trade negotiation which is in the condition of stalemate.

The key functions of WTO include –

Key Functions of GATT: GATT’s main objective and function were to reduce barriers to international trade through the reduction of tariffs, quotas, and subsidies.