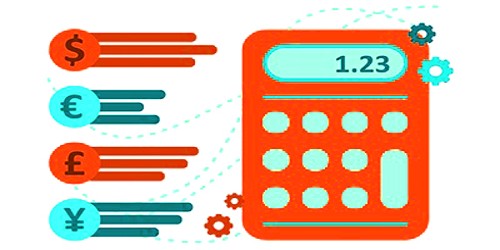 Exchange Rate means the value of one currency for the reason of conversion to another. Knowing the value of home currency in relation to diverse foreign currencies helps investors to evaluate assets priced in foreign dollars. For example, for a U.S.A investor, knowing the dollar to the euro exchange rate is precious when selecting European investments.

There is a multitude of factors which come into play when exchange rates are being determined. There are three methods of determining the exchange rate. These are –

Other common factors are –

Non -intervention: currency in a floating rate world – Currencies that float freely respond to supply and demand conditions tree govt. intervention. Demand for a countries currency is a function of the demand for those countries goods and services and financial assets.

Intervention – Currency is a fixed rate or managed the floating world. A govt. can buy or sell its currency in the open market as a means of in thinning the currency price.

The role of the central banks-each country has a central bank responsible for the policies affecting the value of its currency. Central bank control currencies that affect the value of currencies control banks receive assets are kept in major forms gold foreign exchange reserve and related assets.

Black Markets – A black market closely approximates a price based on supply and demand for currency instead of a govt. controlled price.

Foreign exchange convertibility and controls – Sometimes country with fixed control rate control access to their currencies. A hard currency is a currency that is fully convertible and strong or relatively stable in value in comparison with other currencies. To converse scarce foreign exchange some govt. impose to exchange money.

Purchasing Power Parity (PPP) is a well-known theory that seeks to define the relationship between currencies. According to this concept, two currencies are in balance or at par when a basket of goods (taking into account the exchange rate) is priced similar in both countries. This means that the exchange rate between two countries should equal the ratio of the two countries relative price level. If the price level of none country increase its currency must depreciate in order to maintain PPP, this is important because currencies that are over or undervalued accordingly to PPP this is important because currencies that are likely to correct over time, leading to potential economic impacts and long term change in the exchange rate. PPP helps provide some predictability to their economic impacts. For example, a local currency determined PPP be significantly overvalued can be expelled to depreciate against widely, trade currencies like let the U.S dollar over the long run.