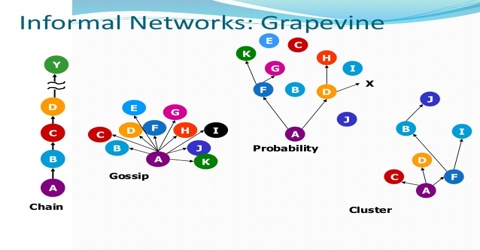 Demerits or Limitations of Grapevine

Grapevine is regarded as an appropriate channel of transmitting a message that cannot be sent through formal channels of communication. However, the grapevine is sot free from limitations. The limitations /demerits are discussed below:

The most damaging aspect of Grapevine is the transmission of distorted information. At times, details of a message are lost, as it is subject to filtering by many people. Since it is an informal channel of communication, people transmit the baseless and distorted message that may harm the organization. Information received through grapevine might not be true. Sometimes people might put in new details to it.

The swiftness through which information reaches to its destination may even be damaging. Its speed makes it difficult for management to stop undesirable rumors. In an informal communication system, utmost communication is made by open conversation. Another great disadvantage of grapevine communication is the fact that it can damage an organization’s goodwill.

Grapevine is highly criticized for spreading rumor and untrue information in the organization. Grapevine carries spiteful and destructive rumors, which can generate a doubtful and stressed situation in the company. Sometimes people hide the real facts and transmit the manipulated picture through the grapevine. This may damage the working environment and produce conflict in the organization. Grapevine information since it is the most part based on rumors tends to bring along with it incomplete information which ends up not giving the actual state of affairs in an organization.

A grapevine, at times, can acutely obstruct the development or efficiency of a company. This is when employees become unproductive thanks to the grapevine. Grapevine communication can make organizations lose a lot of money because thanks to grapevine employees waste work hours talking about the newest rumor circulating around them. The organization pays extremely for this.

From the above discussion, we can say that grapevine has a very negative influence on the organization. It can hamper organizational solidarity, cohesiveness, and harmony. Therefore, management must be very careful and vigilant to overcome the above-stated demerits of grapevine.

What tools are used for Enterprise Collaboration System?

Hardware and Hardware Tools that needs to run a business

Duties of Company Secretary towards Shareholders