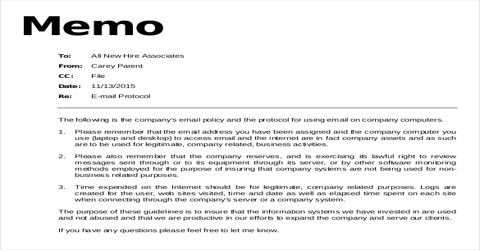 A memo is the most commonly used written tool for internal communication. The advantages of memo are short and directly to the point. It is a timely accomplishment. They can give an enduring record for next references. It is also written to remind someone of action if requires. Managers heavily rely on the use of memo because of its following important advantages:

Memo helps to avoid distortion in messages that occur in internal oral communication. Perhaps the most significant advantages of a memo are it is to the point. Only the main messages are written exceedingly briefly in a memo. The key purpose of memo is to notify the decisions and actions. For this reason, it should be written by the superior authority.

The memo provides all concerned with the same information. Therefore, there is little chance of any misunderstanding between the recipients of a message. Overall, it should be mentioned that memos are very plain in form and simple to use.

Since the memo is a written document, it can be preserved. Such preservation develops an information base in the organization and anyone can access it whenever he needs it. The purpose of the memo is to ask for the decisions and actions. For this intention, it may be drafted by the sub-ordinate.

The memo also helps managers to maintain consistency in their actions and decisions for recurring problems. By examining the previous records, they solve similar problems in a similar way. We can see that many organizations use printed memos. As it is generally printed, it takes less time to draft it.

The use of a memo is restricted within the boundary of the organization. Therefore, through writing a memo, any information can be exchanged throughout the whole organization very quickly. Another vital object of the memo is to provide information from one level to another within the business. As memos are written in a very short structure it saves important time.

A memo is a less expensive medium of communication. It does not require any mail or telephone expenses. It is written in simple papers and can be transmitted very inexpensively. So, the cost of communication through a memo is less than those of others.

Finally, It can help to preserve the good relationship among the superior and subordinates, because the bossing approach is not present here. A memo is issuing orders and instructions, providing a response, providing suggestions, presenting informal reports, solving problems, etc.

Crucial Roles does an Entrepreneur play in forming Strategic Vision