Home Business Factors that determining the Gains from International Trade 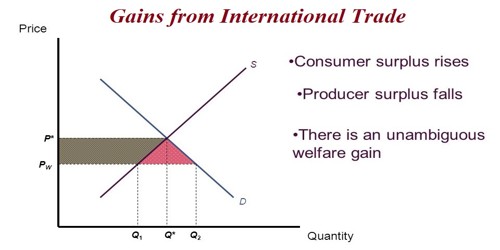 Dynamic gains refer to the contributions which international trade makes to the in general financial development of the trading countries. International trade results in an increase in competence and total wellbeing among consumers and producer in the countries that participate in it. It arises from the reality that no nation is self-sufficient in term of producing all the goods and services that it requires.

Factors that determining the gains from international trade –

The gain from international trade also depends upon the relative productive efficiency of the country. If the productive efficiency of the home country increases, it will be to the advantage of the foreign country (and vice versa), for it will lead to more favorable terms of trade for the latter. As a result, the other country gains by importing cheap goods and its terms of trade improve but that of the home country deteriorate. If the efficiency in producing a commodity in which a country specializes increases, its costs and price fall, and it will be advantageous to the other country. Its terms of trade will improve and it will gain from trade. Moreover, it leads to an expansion in the volume of trade, so that the total gain from trade also increases.

The gain from international trade also depends upon the relative elasticity of demand for the commodities in different countries and the relative elasticity of supply of different commodities in different countries. When exchange takes place as a result of specialization, the amount of the commodity that will be imported by a country depends not only on the difference in ‘cost ratios but also on how the demand for the commodity changes. If the products of the home country command a strong and permanent demand, the expansion in its exports will raise the incomes from exports.

There exists a positive correlation between the size of foreign trade and the total gain reaped by the participating nations. A country which is technologically advanced and has an abundance of capital, its volume of foreign trade will be large and so will be its gain from international trade. However, kinds and quality of factors available to a country and its technological advancement have a unique significance in this regard. A big capital-abundant and technically as well as economically advanced country will have a larger size of foreign trade than a small, labor abundant, technically and economically backward country. Moreover, a country exporting manufactories will have favorable terms of trade against a country exporting primary products.