Home Business A contract is an agreement enforceable by law – explanation 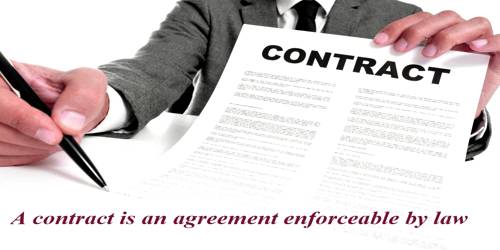 A contract is an agreement enforceable by law –

In our regular day to day life, we make several comments and statements. We say several things to people whom we talk to. Most of these are not with any intention to create any legal obligation. For example, if we say to someone that we will go to lunch with him, it is not a legal obligation. But some, which are related to business or civil matters, is understood to be in a serious mood and have the potential to be legally enforceable. For example, when we hire an Auto-rickshaw for going from point A to point B, we are legally bound to pay and the driver is legally bound to take us from A to B. Indian Contract Act 1872 defines these activities in precise terms in Section 2. An agreement is said to be reached when an offer offered by the offeree has been accepted by the acceptor as an acceptance.

Sec. 2 (a) – When a person signifies to the other, to do something or to abstain from doing something, with a view to obtaining the assent of that other to such act or abstinence, he is said to make a Proposal.

Sec. 2 (d) – When, at the desire of the Promisor, the Pomisee or any other person has done or abstained from doing, or does or abstains from doing, or promises to do or abstain from doing, something: such act or abstinence is called a consideration for the promise.

Sec. 2 (e) – Every Promise and every set of Promises forming consideration for each other, is an Agreement.

Sec. 2 (g) – An agreement not enforceable by law is void.

Sec. 2 (h) – An agreement enforceable by law is a Contract.

Sec. 2 (i) – An agreement that is enforceable by law at the option of one or more of the parties thereto but net at the other or others are avoidable Contract.

From sec 2(e) and 2(h), it is clear that Agreement and Contract are two different things. For an agreement to become a contract, it has to be enforceable by law.

Section 10 states that all agreements that are made by the free consent of the people who are competent to contract, for a legal object and legal consideration, and are not hereby expressly declared to be void, are contracts and are thus legally enforceable.

Distinguish between Insurance and Assurance