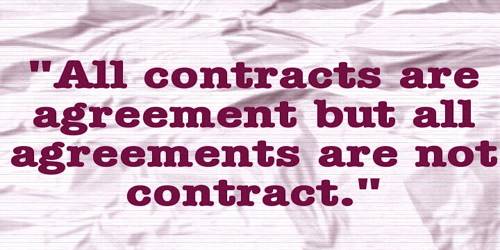 A contract is a legally binding agreement or relationship that exists between two or more parties to do or abstain from, performing certain acts. A contract can also be defined as a legally binding exchange of promises between two or more parties that the law will enforce. For a contract to be formed offer made must back acceptance of which there must be a consideration. Both parties involved must intend to create legal relation on a lawful matter which must be entered into freely and should be possible to perform.

An agreement is a form of cross-reference between different parties, which may be written, oral and lies upon the honor of the parties for its fulfillment rather than being in any way enforceable. All contracts are an agreement because there must be a mutual understanding between two parties for a contract to be formed. All parties should agree and adhere to the terms and conditions of an offer. The following cases illustrate ways in which all contracts are agreements;

Considering person; A buying a radio on hire purchase from person B who deals with electronics and its appliances. Both parties must come to an agreement on payment of monthly installment within a specified period of time. Such an agreement result to specialty contract which a contract under seal.

Agreement; Every promise and every set of promises, forming the consideration for each other, is an agreement.” Thus it is clear from this definition that a ‘promise’ is an agreement. What is a “promise”? The answer to this question is which defines the term. “When the person to whom the proposal is made signifies his assent thereto the proposal is said to be accepted. A proposal, when accepted; becomes a promise.

An agreement, therefore, comes into existence only when one party makes a proposal or offer to the other party and that other party signifies his assent (i.e., gives his acceptance) thereto. In short, an agreement is the sum totals of ‘offer’ and ‘acceptance’. On analyzing the above definition the following characteristics of an agreement become evident:

“All contracts are agreements but all agreements are not Contracts, “Agreements of moral, religious or social nature e.g., a promise to lunch together at a friend’s house or to take a walk together are not contracts because they are not likely to create a duty enforceable by law for the simple reason that the parties never intended that they should be attended by legal consequences.

Rights and Obligations of the Pledger