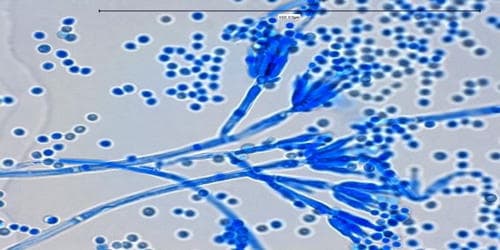 Penicillium: Penicillin is a kind of antibiotic medicine made of fungus, named Penicillium. This medicine destroys many bacteria that cause different diseases. It is a genus of ascomycetous fungi that is of major importance in the natural environment, in food spoilage, and in food and drug production.

Some members of the genus produce penicillin, a molecule that is used as an antibiotic, which kills or stops the growth of certain kinds of bacteria.

Penicillium species are common contaminants on various substances. This organism causes food spoilage, colonizes leather objects, and is an indicator organism for dampness indoors. Some species are known to produce mycotoxins. The health of occupants may be adversely affected in an environment that has an amplification of Penicillium.

Discovery: In 1929, Sir Alexender Fleming invented Penicillin a kind of antibiotic from Penfttliturn notatum, a fungus.

With only one exception the members of the genus Penicillium are filamentous fungi. Penicillium spp. are widespread and are found in soil, decaying vegetation, and the air.

Uses: Just after the discovery of this medicine, it achieved the reputation as a miraculous germ-killing and life wising medicine As a result it was possible to save millions of wounded soldiers from infection and gangrene in the second great World War.

Penicillium is an important genus of phylum Ascomycota, found in the natural environment as well as in food and drug production. Some members of the genus produce penicillin, a molecule used as an antibiotic that kills or stops the growth of certain kinds of bacteria inside the body. 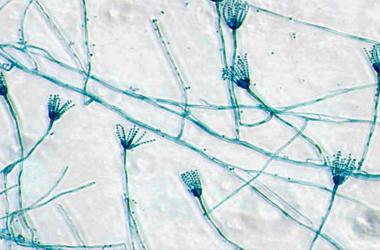 Penicillium is an allergenic form of mold. It is easily recognizable by its characteristic blue or green colored surface with a velvety texture. Penicillin mold is often found in water-damaged homes and buildings. It is found in materials such as carpets, wallpapers, ducting, and even in mattresses. It spreads quickly from one area of the home to the next. Unfortunately, though penicillin is responsible for important antibiotic production and food processing capabilities, it is also the cause of terrible respiratory conditions when it grows indoors.

Penicillin spores can easily become airborne and travel through the home and can be inhaled by occupants, including pets and children. Penicillin exposure can cause pulmonary inflammation and asthma. When exposed to it for a longer time, it can lead to chronic sinusitis. People with immune disorders should not be exposed to penicillin as a penicillin infection can worsen symptoms and lead to further health complications.