Algae are chlorophyll-bearing, simple, thalloid, autotrophic and largely aquatic (both fresh water and marine) organisms. They occur in a variety of other habitats: moist stones, soils and wood. Some of them also occur in association with fungi (lichen) and animals (sloth bear).

The form and size of algae is highly variable (Figure). The algae reproduce by vegetative, asexual and sexual methods. Vegetative reproduction is by fragmentation. Each fragment develops into a thallus. Asexual reproduction is by the production of different types of spores, the most common being the zoospores. They are flagellated (motile) and on germination gives rise to new plants. Sexual reproduction takes place through fusion of two gametes. These gametes can be flagellated and similar in size (as in Chiamydomonas) or non-flagellated (non-motile) but similar in size (as in Spirogyra). Such reproduction is called isogamous. Fusion of two gametes dissimilar in size, as in some species of Chiamydomonas is termed as anisogarnous. Fusion between one large, non-motile (static) female gamete and a smaller, motile male gamete is termed zoogamous. e.g., Volvox, Fucus. 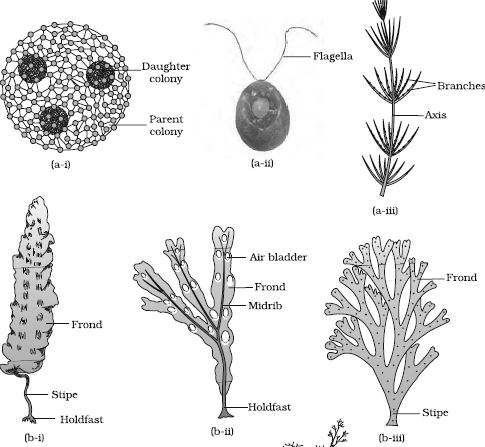