While grouping or arranging the organisms, a biologist faces three scientific ideas, namely taxonomy, systematics and classification. These disciplines though appear similar have slight deviations in their meaning. The term taxonomy is a Greek word. Its components are taxis and nomos. While taxis means arrangement, nomos means law. Thus taxonomy is defined as the “theory and practice of classifying organisms” (E. Mayr 1966).

Based on specific charateristics, animals are grouped in various cat-egories. These categories are otherwise called taxa (singular: taxon). “A taxon is a taxonomic group of any rank that is sufficiently distinct to be worthy of being assigned to a definite category”. The several taxa in animal taxonomy are the Phylum, Class, Order, Family, Genus and Species. This arrangement from Phylum to Species is designated as the hierarchic system of classification. In this system each taxa are based on specific characters of a group of organisms. Eventhough such an arrangement appears to be man made, each taxon is a natural assem-blage. However, human error in identification and grouping may happen.

The taxon, ‘Phylum’ is the largest group. There are several such Phyla constituting the animal kingdom. Members of a Phylum are recognised by certain distinctive features as shown below. 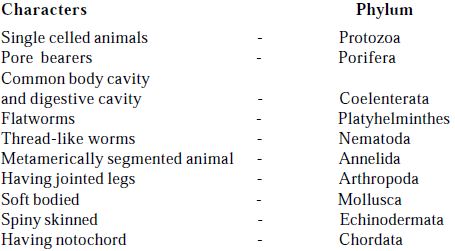 A Class is a next level in the hierarchy. There are only few Classes in a Phylum. The members of each Class are identified by some specific character. Thus for example the Phylum: Protozoa comprises four Classes as follows.

Life cycle in the Mosquito: Sporogony