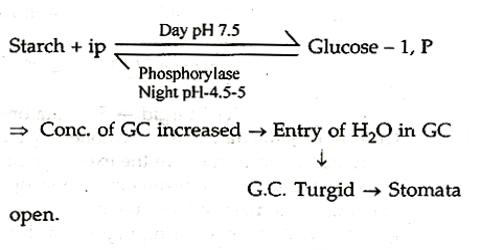 This theory was proposed by Sayre (1926). First of all, Lloyd stated that amount of sugar in GC increases during the daytime & starch in the night. According to him, the theory stated above is correct but, the interchange between sugar and starch takes place due to the fluctuation of the PH of the cell sap.

Photosynthesis remains stopped in the night time but the respiration goes on continuously. As a result, CO2 produced during the respiration forms carbonic acid (H2CO3) which reduces the PH of guard cells (PH7 to PH5). Thus insoluble starch is produced from glucose-1 phosphate (sugar). Sugar changes into starch during the night at low pH in guard cells (Supported by Scarth). 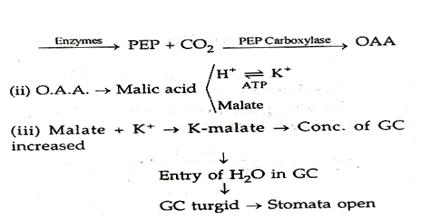 During the daytime, CO2 is utilized for photosynthesis and thus PH rises (alkaline). Sayre observed that stomata open in neutral or alkaline pH, which prevails during daytime due to constant removal of carbon-dioxide by photosynthesis. Stomata remain closed during the night when there is no photosynthesis and due to the accumulation of carbon dioxide, carbonic acid is formed that causes the pH to be acidic.

During the darkness, photosynthesis is stopped and the concentration of CO2 rises as a result of respiration and thus PH decreases (alkaline).

Explain Ribosome with Structure and Function