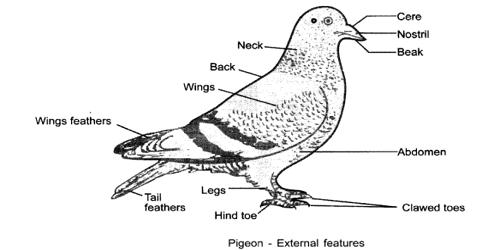 Birds are easily recongnised group of vertebrates. In birds every part of the body is modified to suit their aerial mode of life. Birds possess feathers, beak and feet modified in relation to their aerial life.

The Pigeons are flying birds (carinate). They are known both as wild and domesticated forms. The Pigeons are seen both in tropical and temperate zones. About 10 species of Pigeons are found in India. The pigeons fly in flocks and roost together. The domestic pigeons have many varieties, namely panter, fantail and tumblers. They differ in size, colouration and feather ar-rangement. All of them are, however, descendants of the rock pigeon-columba Livia. 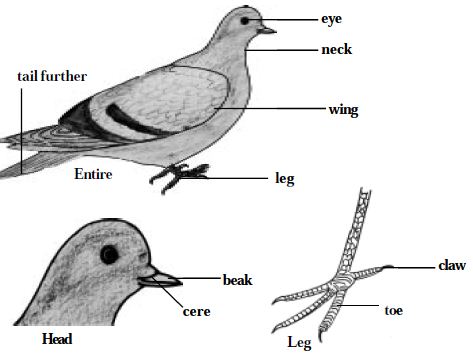 The Body is spindle-shaped. The compact, boat-shaped streamlined body of pigeon is well adapted for their aerial mode of life. Their size varies from 20-25 cm. They are covered by colored feathers leaving beak and a small portion of the hindlimbs. The body of pigeon is divisible into head, neck, trunk, and tail.

The body is divisible into the head, neck, trunk, and a small, conical tail. The head is round and drawn out anteriorly into a strong, hard, pointed beak. The mouth is a terminal wide gape, guarded by elongated upper and lower beaks. The beaks are covered with a horny sheath or rhamphotheca. A swollen area of soft skin, the cere, surrounds the nostril. It is present on each side of the upper beak. The eyes are large and guarded by upper and lower eye-lids and a transparent nictitating membrane. A pair of ear openings are situated at a short distance behind the eyes. Each opening leads into a short external auditory meatus, ending in the tympanic membrane forming the eardrum.

The body is distinctly divisible into three regions — head, neck, and trunk.

(i) Head: Head is comparatively small, spherical, and situated at the anterior-most part of the body. Beaks present anteriorly are formed by the elongation of the upper and lower jaw and they are devoid of teeth. It contains the following structures:

(ii) Neck: Neck is flexible, cylindrical, and long which connects the head with the trunk. It holds the head over the trunk and its flexible nature is responsible for the universal movement of the head.

(iii) Trunk: The trunk is compact, stout, and immov­able. The cloacal aperture opens ventrally at the hind end of the trunk. All the heavier organs are placed on the central part of the trunk and immediate­ly beneath the wings.

The neck is long and mobile. It helps in the movement of the head in various directions. The trunk is compact, heavy and bears a pair of wings and a pair of legs. The cloacal aperture is at its hind end on the lower surface. Projecting behind the cloacal aperture is the tail. Above the tail is a knob on which opens an oil gland or preen gland or uropygial gland. It secretes a fluid used for preening the feathers.

What is Taxonomic Category?