When a female anopheles mosquito bites an infected person, it sucks blood along with all the stages of parasite. But in the gut of the mosquito, only the mature gametocytes survive and the rest of the stages are destroyed. From the gametocytes develop gametes. The process of development of ga-metes from gametocytes is known as gametogony.

Gametogony: The nucleus of the micro-gametocyte divides into many fragments and the cytoplasm is thrown into flagellated structures. There may be as many cytoplasmic structures as there are nuclei. This process is known as exflag-ellation. The resultant cells are called the microgametes. The nucleus of the macro-gametocycte divides equally into two. The cytoplasm divides un-equally. So among the resulting cells one is bigger and the other is smaller. The small cell is thrown out. This process is known as maturation. The re-sulting bigger cell is known as female gamete or macrogamete. 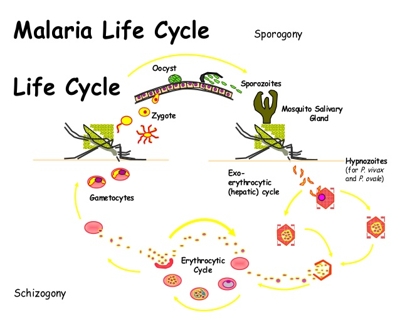 Syngamy and sporogony: Inside the stomach of the mosquito the microgamete and the macro-gametes come into union and nuclear fusion takes place. This kind of union is called syngamy and the resultant form is known as zygote. The zygote assumes an elongated form and is capable of movement. It is known as ookinete. It pierces the wall of the stomach and comes to lie under the outer layer of stomach wall. There, it ceases to move, becomes round and forms a membranous cyst-wall. This stationary zygote enclosed in a cyst-wall is known as oocyst. It grows in size absorbing the nourishment from the host.

The nucleus of the oocyst divides repeatedy, each being surrounded by a fragment of cytoplasm. Thus inside the oocyst, a large number of cells develop into minute, slender, sickle shaped bodies called sporozoites. The cyst wall breaks, liberating the sporozoites into the body cavity (haemocoel) of the host. They wriggle forward and enter the salivary gland. When such an infected female anopheles mosquito bites a healthy person. it injects into his blood a stream of sporozoites. This kind of transmission is called inoculation.

Phylum Nematoda and their Characteristies