Home Physics What is Harmonic Motion?

We consider the uniform motion of a point along a circle of radius A. Light produces a shadow on a screen. The motion of the shadow mimics harmonic motion, and angular velocity is related to the period, ω = 2π/T. The coordinate of the shadow is x = A cos(ωt). The magnitude of the object’s velocity on the reference circle is constant v = Aω . The component ofthe velocity vector along the screen is -Aω sin(ωt). 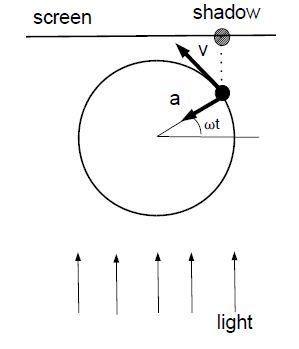 That is, the force is linear in the coordinate x. The force is negative, F < 0 [F < 0] when x > 0 [x < 0]; that is, the force drives the shadow back to the origin x = 0. We say that F is a linear restoring force. The period of oscillatory motion is independent of the amplitude of the motion.

Example: A pearl is moving in a bowl. a) Show that the force on the pearl is a linear for small angular displacements. b) Determine the period of harmonic motion of the pearl.

Solution: The weight of the pearl in tangential direction is given by Ftangentim = -mg sin ø. For small angles [in radians], sin ø ≠ sin ø, so that the force is given by

That is, the force is proportional to the angular displacement. We write the tangential acceleration in terms of angular acceleration, a = Rα, where R is the radius of the bowl. Newton’s second law yields mRα = -mgϕ, or

We assume above that x = A at time t = 0. This is not the case in general, and instead we have for the ‘phase angle’ ϕ = ωt → ϕ0 + ωt. We then have for the coordinate, velocity; and acceleration:

These equations can also be derived with methods from calculus [i.e., taking the derivates with respect to time t Vibe oscillatory motion is specified by the amplitude A and the initial phase ϕ0.

What is Biomass Energy?

Explain Workdone in an Isothermal Expansion