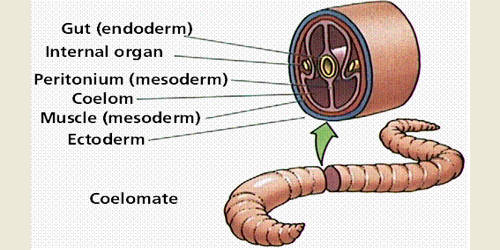 Earthworms are invertebrates. Their skin is permeable, allowing water to pass through. They must live in damp habitats or they will dry out and die.

The body wall of an earthworm is thin soft and moist. It consists of the following layers arranged from outside.

Cuticle: It is a thin, transparent, iridescent layer secreted by the underlying epidermis.

Epidermis: It is in the form of a single layer of columnar cells. This layer contains gland cells and receptor cells.

Dermis: It is a very thin sheet of connective tissue forming a basement for the epithelial cells on the outside and muscles on the inside.

Muscles: The muscles are arranged in two layers, namely the outer circular and inner longitudinal.

Coelomic epithelium: It is the innermost layer of the body wall forming the lining of the body cavity.

Functions of the Body wall

Body Cavity: A spacious body cavity called the coelom is seen between the alimentary canal and the body wall. The body cavity between the muscular body wall and intestine is divided into segments, with a membrane (septum) between each. It is divided into a series of compartments by the transverse partitions of connective tissue called the septa. The coelom is lined with the coelomic epithelium and filled with coelomic fluid. It is a colorless fluid with amoeboid coelomic corpuscles floating in it. The fluid oozes out through the dorsal pores.

It consists of a schizocoel type of body coelom in which the cavity is formed by the splitting of embryonic mesoderm. It keeps body surface moist as a condition quite essential for respiration. The coelomic cavity communicates to the exterior through reproductive and excretory apertures. Haemocoel is a body cavity that normally contains blood and functions as part of the circulatory system. The germ cells are budded off from the wall of this cavity.

Earthworms move about by contraction and expansion of its body wall. When the circular muscles of the body wall contract, the body becomes thin and elongated. This process results in the forward extension of the body. Then it fixes itself firmly to the ground with the help of the body setae and mouth. Subsequently, when the longitudinal muscles contract, the body becomes thick and shortened. As a result, the body is drawn forward towards the anterior end which is already fixed to the ground. Thus by a repeated process of alternate contraction and expansion of muscular body wall locomotion is affected.