Here shown Dicotyledonous Root in Figure, it shows the transverse section of the sunflower root. The internal tissue organization is as follows: 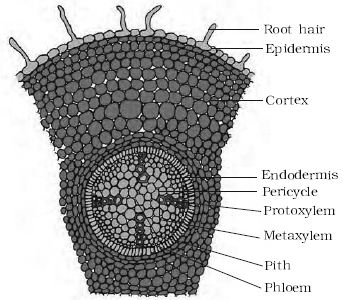 The outermost layer is epidermis. Many of the epidermal cells protrude in the form of unicellular root hairs. The cortex consists of several layers of thin-walled parenchyma cells with intercellular spaces. The innermost layer of the cortex is called endodermis. It comprises a single layer of barrel-shaped cells without any intercellular spaces. The tangential, as well as radial walls of the endodermal cells, have a deposition of water-impermeable, waxy material-suberin-in the form of casparian strips. Next to endodermis lies a few layers of thick-walled parenchyomatous cells referred to as pericycle.

Initiation of lateral roots and vascular cambium during the secondary growth takes place in these cells. The pith is small or inconspicuous. The parenchymatous cells which lie between the xylem and the phloem are called conjuctive tissue. There are usually two to four xylem and phloem patches. Later, a cambium ring develops between the xylem and phloem. All tissues on the inner side of the endodermis such as pericycle, vascular bundles and pith constitute the stele.

Active Absorption of Water in Plants from Soil

Effect of Light and Temperature on Plant Growth and Yield

Discuss the Structure and Habitat of Plant Polysiphonia