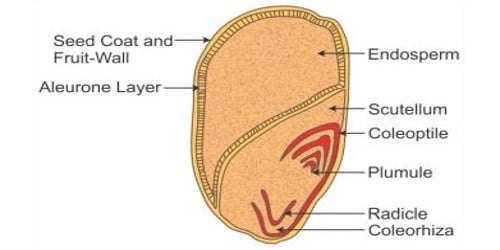 Generally, monocotyledonous seeds are endospermic but some as in orchids are non-endospermic. In the seeds of cereals such as maize, the seed coat is membranous and generally fused with the fruit wall. The endosperm is bulky and stores food. The outer covering of endosperm separates the embryo by a proteinous layer called the aleurone layer.

The embryo is small and situated in a groove at one end of the endosperm. It consists of one large and shield-shaped cotyledon known as scutellum and a short axis with a plumule and a radicle. The plumule and radicle are enclosed in sheaths which are called coleoptile and coleorhiza respectively (Figure).

Monocotyledon is a classification of flowering plants. Corn, wheat, and rice are examples of monocot seeds or monocotyledons. Monocots have only one leaf inside the seed coat. It’s often only a thin leaf. Some monocot seeds examples include ginger, banana, sorghum, onion, coconut, and garlic.