The male reproductive system consists of a testis, sperm duct, seminal vesicle and an ejaculatory duct. The testis is formed like a coil and occupies a greater portion of the body. The sperm duct is located behind and the bulky posterior part is the seminal vesicle. It later opens into the cloacal aperture. They have a pair of penial setae. Male roundworm discharges sperms through the cloacal aperture. 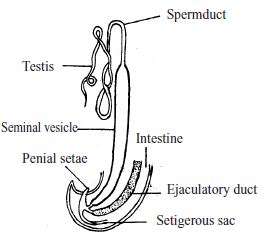