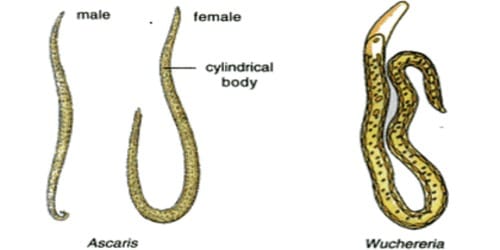 The body of the Aschelminthes is circular in cross-section, hence, the name roundworms (Figure). It can be free-living or parasitic. They may be free-living, aquatic and terrestrial or parasitic in plants and animals. The free-living organisms are particularly abundant in soils and sediments and they feed on bacteria. Generally, they are marine or freshwater animals.

Some of these plant parasites and can cause disease in crops that are economically essential. The others can be found in animals and human beings. 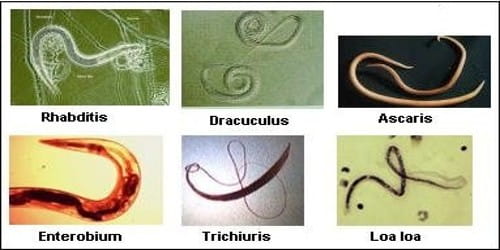 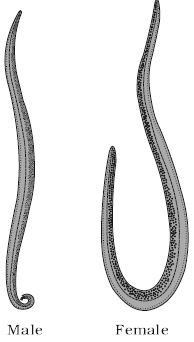 Roundworms have the organ-system level of body organization. They are bilaterally symmetrical, triploblastic and pseudocoelomate animals. The alimentary canal is complete with a well-developed muscular pharynx. An excretory tube removes body wastes from the body cavity through the excretory pore. Sexes are separate (dioecious), i.e., males and females are distinct. Often females are longer than males. Fertilization is internal and development may be direct (the young ones resemble the adult) or indirect.

They are cylindrical, unsegmented and triploblastic animals commonly known as roundworms. They are mostly aquatic, but few are terrestrial. Some of the general characters of phylum Aschelminthes are as follows:

Body Form: The body is bilaterally symmetrical. They are called roundworms because they appear circular in cross-section. A distinct head is absent, but internal cephalization is present. However, the mouth is present in the anterior. They are un-segmented.

Body cavity: The body cavity is called pseudocoel or pseudocoelom as it devel­ops from the blastocoel of the embryo. They don’t have the power of regeneration. They are bilaterally symmetric.

Size: The body size of these organisms varies from microscopic to several centimeters in length.

Development: Development may be direct or indirect. Fertilization is internal. During indirect development a larva is present. It may be with or without an intermediate host.

Digestion in Stomach of Toad