The canal extended from, the mouth opening to the cloacal aperture is called the alimentary canal or gut. Sometimes this canal is narrow and sometimes it is wide and coiled.

(i) Mouth: At the front end of the body of the toad the mouth or mouth opening is situated. The mouth of the toad is quite wide and semicircular. There are two jaws on the upper and lower sides of the mouth. It can not move the upper jaw, but it can move the lower jaw. The jaws are toothless.

(ii) Buccal cavity: Behind the mouth opening the wide buccal cavity is situated. On the lower side of the buccal cavity lies the wide muscular tongue. Its front end is attached with the lower jaw and the posterior end is free. The tongue is the main organ for capturing prey. The toad catches worms and insects throwing the posterior part of the sticky tongue in a reverse way and brings them directly into the mouth. Internal nasal apertures, aperture of the eustachian tube etc. are situated inside the buccal cavity. 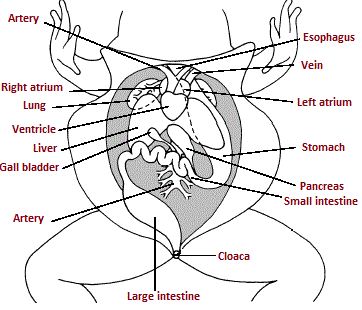 (iv) Oesophagus: The stout, short and canal-like part next to the pharynx is the oesophagus. Through the oesophagus, food substances reach the stomach.

(v) Stomach: Behind the oesophagus, the curved sac-like part is the stomach. Its wall is thick, muscular and glandular. The glands remain within the inner surface of the wall. The stomach is divided into parts, cardiac and pyloric part. Comparatively the thicker part which is close to the oesophagus is the cardiac part and the part which is close to the small intestine is the pyloric part of the stomach. There is a round muscular valve at the junction of the stomach and intestine. It controls the entrance of food into the small intestine.

(vi) Intestine: The coiled duct extended from behind the stomach up to the cloaca) aperture is the intestine. The intestine is divided into two parts, Small intestine and Large intestine.

Difference between Male and Female Roundworms