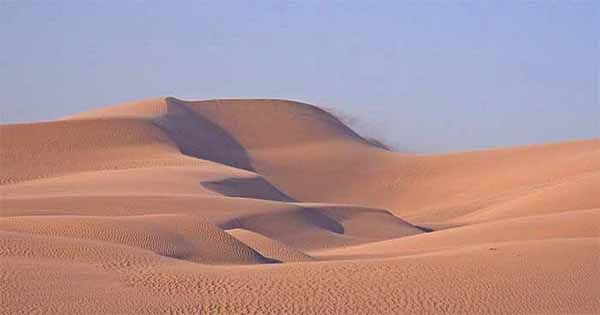 We know surprisingly little about this process, but considering how important it can be. Not only that, but a new study suggests that what we know is wrong. The sand is formed by the pressure of wind or water and is moved downstream when the direction is regular.

Observations of single sand dunes have revealed that larger types of mounds move more slowly. However, it’s been an open question whether nearby dunes interact with each other; this is something that will affect our models of how mounds move. This type of movement can pose a threat to sandy desert villages or farmland or to channels that pass through strong currents. The same dangers can be posed by tidal surges and submergence of wave power generators.

Considering this problem, physicists have imagined that small sand dunes get caught up with larger sizes and come together to form a single mound. However this has never been observed and others have suggested that when the mounds collide they throw at each other, probably transferring some of them to the sand process, explaining why we have never seen mounds like the first scene.  However, while modeling a sand tiller in a water-filled flow tank, a PhD student at the University of Cambridge found something unexpected.

The front unexploded ordnance created a turbulent awakening, with cyclones that pushed it away from the rear. He reports in the Physical Review Letter that at first when the two hills were the same size, the downstream moved faster and widened the distance between them. The lead tune needs to be 2.5 times the mass of its followers to match its speed. Although the experiment was conducted underwater, Bacik expects the aerated hills to behave similarly.

Previous mound tracks were too short to allow multiple mound observations over a long period of time, but Bacik and colleagues created a circular track and watched the mounds for hours on end. The distance between the hills continues to increase until it is stabilized by separating the two 180 degrees.

In the wider world, where the Danes move more or less in a straight line, no such balance will occur and the gap is expected to widen until other forces intervene. This may explain why large fields are usually spaced regularly, without sand interference. It remains to be seen what this means for trying to combat the Dune migration, but some changes will probably be needed to existing strategies.

Bacik was initially not interested in interactions between the hills. “Initially, I put multiple mounds in the tank to speed up data collection, but don’t expect to see how they started to communicate with each other,” he said in a statement.