If the head of a cockroach is cut off, it will still live for as long as one week. In the head region, the brain is represented by supra-oesophageal ganglion which supplies nerves to antennae and compound eyes. In cockroach, the sense organs are antennae, eyes, maxillary palps, labial palps, anal cert.’, etc. The compound eyes are situated at the dorsal surface of the head. Each eye consists of about 2000 hexagonal ommatidia (sing.: ommatidium). With the help of several ommatidia, a cockroach can receive several images of an object. This kind of vision is known as a mosaic vision with more sensitivity but less resolution is common during the night (hence called nocturnal vision).

The Nervous System of Cockroach can be dividable into Three Parts: 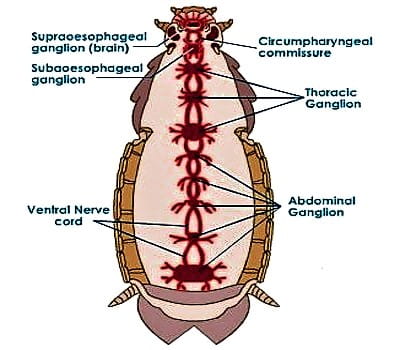 (I) Brain or Supra Oesophageal Ganglion: It is anterior-most ganglionic mass above the esophagus between the supporting apodemes of the tentorium. It comprises of the following components.

(II) Sub-oesophageal Ganglion: It is oval shaped, lines below the esophagus in the head region. It gives off paired nerves supplying their respective appendages.

(III) The Ventral Nerve Cord: Consists of a series of ganglia lying on the floor of thorax and abdomen.

The peripheral nervous system consists of nerves starting from the ganglia of the central nervous system and supplying to diverse organs in the periphery. The nerves originating from the nerve ring and ventral nerve cord to innervate dissimilar parts of the body compose the peripheral nervous system. From the brain arises a pair of optic and antennary nerves supplying to eyes and antennae correspondingly. Three pairs of nerves originate from the supra-oesophageal ganglion—optic, antennary and labrofrontal nerves. The suboesophageal ganglia supplies paired nerves to mandibles, maxillae, and labium.

The autonomic or stomatogastric or sympathetic or visceral nervous system of cockroach consists of some ganglia and their connectives. The sympathetic or visceral nervous system consists of a small frontal ganglion in front of the brain dorsal to the pharynx, an oesophageal ganglion on the dorsal side of esophagus and a huge visceral ganglion on the dorsal surface of crop. It includes the frontal, occipital, visceral or ingluvial and pre-ventricular ganglia. The nerves from these ganglia are connected with the supra-oesophageal ganglion.