In the male toad, the organs which take the direct part in reproduction are- 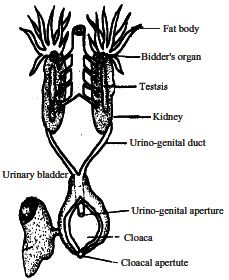 Testis: In the male toad on the dorsal side of the abdominal cavity two elongated, slightly yellowish testes are present. These are attached to the kidneys. Sometimes they are divided into pieces. The testis remains attached to the kidney by a thin membrane called mesorchium. Each testis is formed of innumerable seminiferous tubules. Sperms are produced from the inner walls of these tubules.

Vas efferens: Some smaller ducts coming out from the testis remain directly connectd with the collecting ducts of the kidney: These fine ducts are called van efferentia. Sperms from the testis enter the urino-genital duct through these ducts.

Vas deferens or Uriono-genital duct: A duct comes out from the convex surface of each kidney. It is the sperm duct or vas-deferens of the male toad. Urine and spenns both flow through this tube. So it is also called urino genital duct. Each duct becoming dilated forms the seminal vesicle below the kidney.

Cloaca: Behind the rectum, the common chamber where the rectum and urino-genital duct opens is called cloaca. Through this sperms can pass towards the cloaca! aperture.

Cloaca aperture: The aperture situated at the extreme posterior end of the body is called cloaca! aperture. Sperms are discharged outside through this aperture.

Bidders’ organ: This red coloured organ is situated in the anterior part of each testis. It is an inactive organ in male toad and in the female toad, it remains in immature condition. It vanishes in mature female toad but persists in mature male toad with small size. Its function is not yet known.

Structure of Toad’s Ovum and Sperm