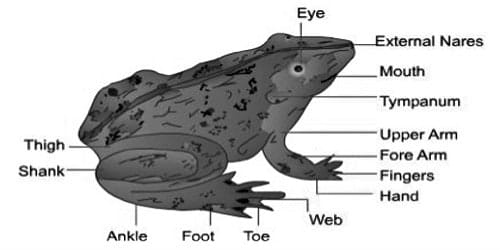 Toad is an ugly animal. Its skin is grey colored with warts. Toad is 10-13 cm long and 7 cm wide. Its body can be divided longitudinally into two similar parts. So they are bilaterally symmetrical. Toads generally have shorter legs and rougher, thicker skins.

The body of toad can be divided into two regions head and trunk. It has no neck. A fully-grown toad has no tail and the fingers of the feet are clawless.

The head is nearly semicircular in outline with the bluntly rounded snout in front. The front portion of the head of the toad is blunt and the posterior portion wide. At the front end of the head, there is a wide mouth situated transversely. There are two jaws above and below the mouth aperture. There are no teeth in the jaw. At the upper side of the mouth towards the front end of the head, there are two apertures provided with thin valves. These apertures are the nasal apertures. The eyes are rounded, large, prominent and located on each side of the head. Two round eyes are situated at the posterior part of the nasal apertures. In the eye of toad, there are three eyelids, upper eyelid, lower eyelid, and a transparent thin membrane. This thin membrane is called a nictitating membrane. There are no hairs on the eyelids of toad, nictitating membrane protects the eye from dust and keeps it moist.

At the back of each eye, there is situated around, smooth membrane they are tympanum. At the back of the ears, there are two glands on the two sides. These are called parotid glands. From these glands, toxic juices are secreted. Toad utilizes this secretion for self-defense. At the junction of the head and trunk of male toad, that is, on the ventral side of the mouth cavity, there is a blackish sac. It is called vocal sac. Vocal sac takes part in the production of sound. 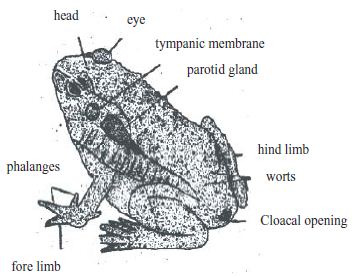 The trunk of the toad is small and the thorax and abdomen cannot be marked separately. It is short and flattened from above downwards. The trunk is wider and bulkier than the head. They have a pair of legs in front and a pair at the back of the trunk. The front pair of legs is called forelimbs and the posterior pair is called hind limbs. As the base of the fingers of their legs is partly joined together by a thin membrane, they are called webbed feet. In the forelimb of toad, there are four and in the hind limb, there are five clawless fingers. The hand is divisible into three parts – the wrist or the portion next to the forearm, the palm or the broad middle portion and the digits or fingers.

During the breeding season at the lower side of the forelimb of the male toad, a kind of pad is seen. It is called a nuptial pad. At the end of the posterior, there is an aperture. This aperture is known as cloacal aperture, through which faeces, urine, and reproductive cells are discharged outside. Observing the external characteristics, it is possible to separate the female toads from the male ones.

During the breeding season, these differences are more obvious.

1. When matured, the male toad is smaller in size than the female toad.

2. The abdomen of the male toad is narrow and elongated.

3. The male toad has vocal sac.

1. When matured, the female toad is bigger in size than the male toad.

2. During the breeding season, the abdomen of the female toad becomes much wider

Transportation of Carbon Dioxide of Toad