We have known earlier that the blood vessels which supply blood to various organs of the body from the heart are called the arteries Arteries, arterioles and capillaries together form the arterial system. 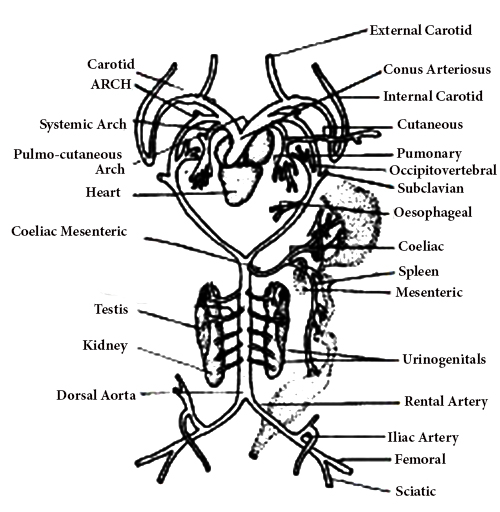 Carotid arch: Arising from the truncus arteriosus this artery has gone up being divided into two parts. The upper and lower arteries are respectively called external carotid and internal carotid. These arteries supply blood to the buccal cavity tongue and outer side of the skull and brain.

Systemic Arch or Aorta: A systemic aorta arising from the middle of each of the two sides of the truncus arteriosus meet together behind the heart surrounding the two sides of the left and right lungs. This joined artery is called the dorsal aorta. From each systemic aorta arise some branched arteries such as the Laryngeal artery, Occipito vertebral artery and Subclavian artery.