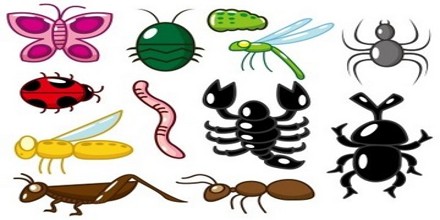 Some of characteristics of Invertebrates are Describe below.

Invertebrates do not have vertebral columns. These animals do not have any skeleton. Their eyes are simple. Sometimes they have many small eyes gathered together into one eye, which is a compound eye. They do not hue tails.

Invertebrates can be of different kinds. Many of them are so tiny in size that they cannot be seen with bare eye. Amoeba is an example of such animal. Earth worm and leech belong to another group of animal. Their bodies are divided into many segments. Snail and oyster fall into yet another group. Their bodies are not segmented and usually covered with hard shells. They have muscular foot. Butterfly, mosquito, fly, cockroach, white ant, bee etc. are insects.

In the animal kingdom this kind of animals are the largest in number. Their body is divided into three parts e.g. head, thorax and abdomen. They have joint foot and compound eyes. Some of these insects are useful. They are called useful insects. Examples: bee, silk worm etc.

On the contrary, mosquito and fly spread various diseases among us. Some other insects such as white ant, Leda insect, rice hispa etc. cause damages to our houses, furniture and crops. There are some marine animals whose integument is spiny. Star fish and sea urchins belong to this group. Jelly fish and corals are different types of invertebrates. They have a body cavity coelenteron. They base a single opening which is used for both intaking food and expelling off wastes.