The pectoral girdle almost encircles the anterior part of the trunk region of the body. It occupies almost the whole interior region of the body excepting the midline of the dorsal side. This part is covered with skin and muscle. The pectoral girdle of toad can be divided into two equal or symmetrical parts. Each symmetrical part is formed with the combination of bones and cartilages. This girdle remains attached with the backbones by muscles as a result of which by keeping it in a proper place, completion of different types of work becomes very easy.

We have known earlier that the pectoral girdle can be divided into two similar parts. Each part consists of the following components:

a. Supra-scapula: It is a wide, plate like cartilage. One end of the supra -scapula is joined with the scapula and the other end remains free. The free end is attached with the backbone by muscles and ligaments.

b. Scapula: Scapula is a narrow hard long bone. One end of this bone is attached with the supra-scapula and the other with the clavicle and coracoid. 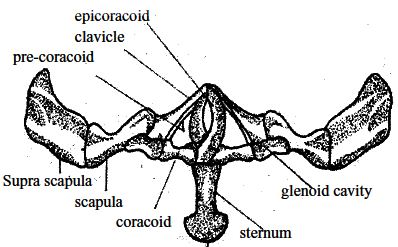 d. Coracoid: This bone is hard bulky and thick. One end of the coracoid, which is attached with the scapula, forms the glenoid cavity and the other end is joined with the precoracoid.

f. Epicoracoid: It is a bent cartilage whose one end is joined with the coracoid and the other end with the precoracoid.

g. Clenoid cavity: In every half of the pectoral girdle there is a cavity in between the junction of scapula, coracoid and clavicle. This cavity is known as glenoid cavity.

h. Sternum: At the ventral side of the body there is an expanded part made of cartilage behind the coracoid of the two halves of the pectoral girdle, it is called the sternum. The posterior end of the sternum is rounded in toad.