This phylum is the largest in the animal kingdom. About 60-65% of the known animals belong to this phylum. They are – universally distributed and are adapted to live in almost all types of environments.

Many species are either to or endoparasite. They are terrestrial or aquatic. Many of them are capable of flying like cockroach, butterflies, Bagdaprawn, king crab, spider etc are members of this phylum. 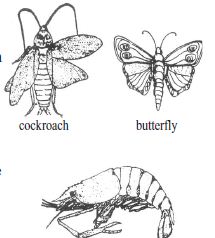 Fig: A Animals of Phylum Arhropoda